September 5th 1981 Apartment Residents of Queens, New York (US), reported an encounter with something ''otherworldly''. In fact, had it not been for the much denied intervention of The US Military, a possible abduction could have occurred. It was around 10 PM when Residents of The Apartment Building all noted that a ''Green Light'' was illuminating their building. Many looked out of their window and cast their eyes to the skies. These people reported seeing a massive ''Bell-shaped Craft'', roughly 3 to 400-feet in height. The ''Bell'' was pulsating with Green and Yellow lights. Slightly tilting and spinning in a slow movement, The ''Bell'' had a large triangular ''Light'' on it's bottom, much as a searchlight. It shown this ''light''' on several parked vehicles on the street. Then, The ''Bell'' aimed it's ''light'' at the Apartment Building itself!

Many Resident's reported hearing ''screams from inside'' (those of a woman), whole some began to run through the hallways in an attempt to located the woman, some remained transfixed on The ''Bell''. Withing minutes, the unmistakable sound of a Military Fighter Jet was heard, somewhere above The Object. Suddenly, a series of very ''bright White lights'' illuminated The Craft. Instantly, The ''Green Light'' shut off and The ''Bell'' shot straight up into the sky. The ''Jet'' flew off in ''pursuit'' - It was later learned that the ''screaming woman'' was Resident who, like the others were watching the amazing spectacle. That was until the ''Green Light'' hit her window. Bathed in the light, the woman felt that she was being'' pulled away''. The sensation stopped with the arrival of the Military Jet. Of course, no Military flights were reported over New York City that night, nor was any ''unusual Object''.....But The apartment Residents know better! 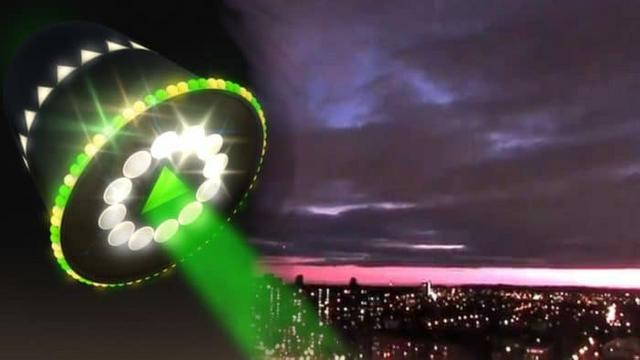