Legend tells of this French Monster roaming Gevauden (modern day Lozere, France) between 1764 and 1767. Described by Authorities as an unusually large Wolf-like creature , it has been documented with having killed between 60 and 100 children and adults. Over 30 persons were seriously injured. The creature's modus operandi was to rip out it's victim's throats (or devour them), leaving bloody wreckage. So great was the creature's killing spree, that The French Government spent vast amounts of monies and materials (soldiers), searching for the creature. Said to weight 400 pounds and covered in a semi-long reddish fur, The Beast sported a long 5 foot tail (described as serpent-like) .King Louis XV sent 2 experienced Royal Huntsmen to Gevauden to finally rid the Region of this creature. On September 20, 1765 they succeeded in killing, what they described as a Eurasian Wolf . This beast was 130 pounds and some 6 feet long!. Light gray in color, it was reportedly stuffed and sent to King Louis. However, not long later......yet another attack!

This time (leaving nothing to chance), a local Hunter Jean Chastel, went to his local Priest and had several silver bullets blessed. He (like the Royal Hunters), went ''a looking'' for our beast. On June 19, 1767 he found the monster, a massive 6-foot long, red glowing eyed being in the woods of Gevauden. He fired. The beast fell dead. The killings and attacks stopped. Now logically, many modern Naturalists claim that the attacks were in fact caused by an obvious wolf pack (albeit large ones). Another theory was that Jean Chastel crossbred (and raised a larger than normal Great Mastif Hound), wishing to cash in on the 300 pieces of silver The King offered for the beast. But, one wonders....why did the killings stop AFTER a silver bullet was used. 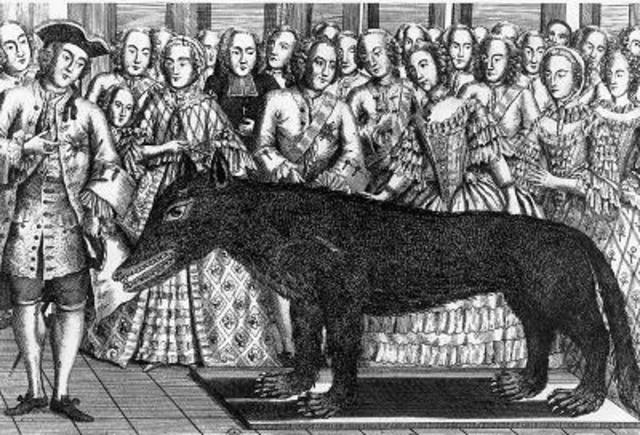