The ''Battle of Los Angeles''

America was at War. World War II had just started for The U.S. (a scant 2 months prior) with the attack against it's Naval Forces at Pearl Harbor (Hawaii). Many in the US Military thought that Japanese Bombers and Submarine attacks could happen at any instant . California (being important to the War effort), was a natural target for Imperial Japan. Hundreds of Coastal Artillery Batteries, thousands of Troops and hundred of Aircraft were dispatched and positioned in the State. Local Citizen's were all unofficial members of The Civil Air Patrol (out spotting the skies for that Japanese Squadron they KNEW was right around the corner). Californians were scared (and jittery). So was the Military assigned to protect the State. What transpired in the early morning hours of 1942 has been a point of MUCH debate. MANY Pilots from all over the World (Military and Commercial) were well aware of strange craft and related phenomena in the Air (they had been since flight began).

Forward Observation Posts reported multiple high altitude sighting of unknown silvery aircraft flight at a possible altitude of 12,000. Air Raid Sirens activated over The City of Los Angeles, Glendale and Pasadena. Anti-Aircraft fire erupted from the ground (both Machine Gun and Cannon). Huge Air Searchlight were pointed into the skies at the Squadron of silvery lights . Some Observers stated that the craft had no wings and had a circular appearance. Over 1,400 rounds of high-explosive cannon shot was fired (shrapnel fell throughout The City without injury). The high flying objects (many that were supposedly hit dead on ), continued their slow movement over Los Angeles and out to sea. The President of The United States was even advised. The local (and National) Newspapers all reported the story of the battle. Over the coming weeks, the story was pulled and any Servicemen involved with the battle were told to be quiet about (or face being shipped to Europe or The Pacific).

As the years went on, many Historians studied the only known photograph of the battle (while it was taking place). The Los Angeles Time was even threatened to destroy the photo by The Government (not wanting to start a panic). The photo was examined over the last 70 years with all types of Modern enhancement equipment. Most conclude that they just don't know what the Object was. The Government sated that they were possible Japanese Fire Balloons (designed to travel The Gulf Stream in the atmosphere and then release incendiary devices along the West Coast). Japan admitted after the War that it did attempt this -but NOT in 1942 but 1944. Further they claimed that they would have monitored local News and taken the attack as a possible successful attempt to try again. Germany stated that it did NOT send bombers or fighters over Los Angeles in 1942 (being well beyond their operational abilities at the time). To this day, The Battle of Los Angeles is celebrated with a gala local Event to celebrate whoever it was we defeated (or scared off!). 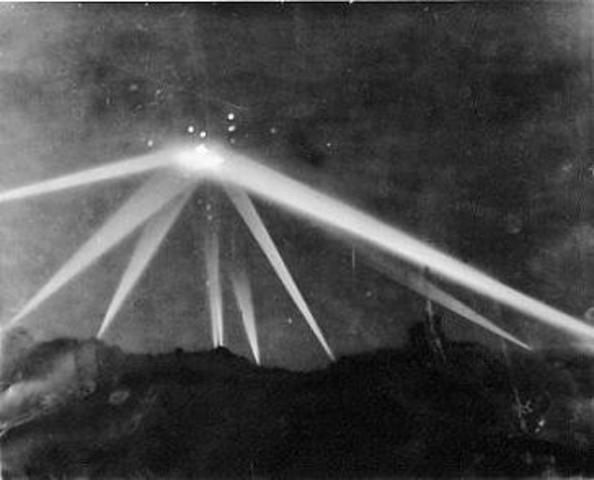