.)Akin to The Roswell Crash, The Aztec Incident happened on March 25, 1948 in Aztec, New Mexico. As the story goes, a Saucer-shaped Craft roughly 99 feet in diameter crashed into the Desert. Tracked by local Military Radar, they quickly went to the scene of the incident. Many different stories have surfaced. No doubt the Government had learned it's lesson from Roswell, for much of the facts known are at times twisted. Those sources brave enough to speak in later years said that when the Government arrived at the crash site, the Craft was in perfect condition. What was noted, was that the Object had attempted to correct it's flight path trying to avoid hitting a mountain top. Upon crashing into the Desert floor, a massive crater was made. Investigators noted many small window Ports around the ship. Upon closer investigation, it appeared that the interior of the Craft was filled will bodies.

The bodies were apparently dead (from the Investigators point of view). After many hours of examination of the exterior of the Craft, access was gained via a button which (when pressed) opened. Inside the Craft, it was noted that the inside was bigger than it appeared - making some to determine that normal human physics did not apply. Military vehicles began to removed what amounted to 16 Beings, described as 4-feet tall, with rounded hairless heads . Further, the Beings eyes were black and cat-like . All the Beings were wearing a one-piece outfit without zippers or buttons . Some of the Beings were missing limbs (making Investigators feel that they suffered trauma upon impact).

Closer investigations of the Craft interior yielded strange writing on equipment and controls that could not be identified . The Crafts propulsion section was examined (again with the same dimensional issues regarding size inside as opposed to outside the Craft). After several hours, heavy Military equipment was brought to Aztec (witnessed and remembered by Residents). Many Flatbed trucks went through Town carrying large Objects - well covered with Armed Guards stationed on each vehicle. When rumors of a possible Saucer Crash finally brought the more curious in Town several weeks later Soldiers were STILL stationed at the site.The Government had long denied the Crash at Aztec (much as it did Roswell). MANY of those who talked in later years were threatened. In the 1950s, the story made Mainstream Media with UFO Radio Talk Show Pioneer, Frank Scully. He claimed even he was threatened repeatedly NOT to release the story. When he did, the Government claimed that Scully had made up the entire story (borrowing heavily from the Roswell Crash rumors ). 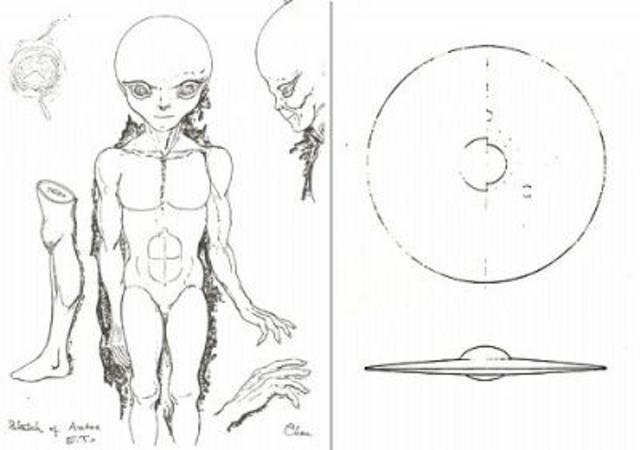