Mr. Antonio LaRubia will bever forget what happened to Him in September of 1977, on a lonely stretch of Highway near Paciencia, Brazil. A Bus Driver by Trade, He was returning to The City after His Route – when, without cause – His Bus suddenly stopped. All electrical system were inoperative as well. Unsure of what happened, LaRubia stated that His Bus was enveloped in a ‘’bright Light’’ – ‘’brighter than The Sun’’. LaRubia stated that despite His ‘’fear’’ and ‘’need to run’’ – he could not. He was ‘’frozen into His seat’’. LaRubia stated (later), that a ‘’massive saucer-shaped Craft’’ – descended not the road directly in front of Him. He estimated it to be roughly ‘’70-feet in diameter’’. As soon The Craft ‘’hovered over The Bus’’, LaRubia ‘’passed out’’. LaRubia claimed when He awoke He was inside The Craft (not knowing how He was removed from The Bus). Able to stand on His own, but moving ‘’very slowly’’, LaRubia said that He was ‘’greeted’’, by (5) ‘’machine-like’’ Creatures. They had ‘’no legs’’ but ‘’ arms that were serpent-like, without hands or fingers’’. A ‘’boxy torso, The Beings had a ‘’cylindrical head with a single eye-light object in the center’’. A long wire extended about 1 to 2 feet from Their ‘’Head’’. Overall, The ‘’Robotic Creatures’’ were a ‘’dull Gray in color’’.

LaRubia stated that while These ‘’Beings’’ did not speak a ‘’language’’, He felt ‘’emotions’’ which were ‘’revealed to His Mind’’. He felt ‘’no fear’’ from the very strange looking Beings. After (what LaRubia felt was several minutes), He ‘’blacked out’’. When He awoke a second time , He was seated back on His Bus (which was ON and fully functional). No evidence of any Craft or The Beings were seen. LaRubia stated that he initially did NOT tell anyone, for fear They would think h was ‘’insane’’ and may lose His Job. But many years later, when He did not only relate His encounter, but formally reported to an International Reporting Agency – He reported ‘’many sleepless nights, severe headaches and nightmares’’ for many years, EVERY time He ‘’thought of The Event’’. 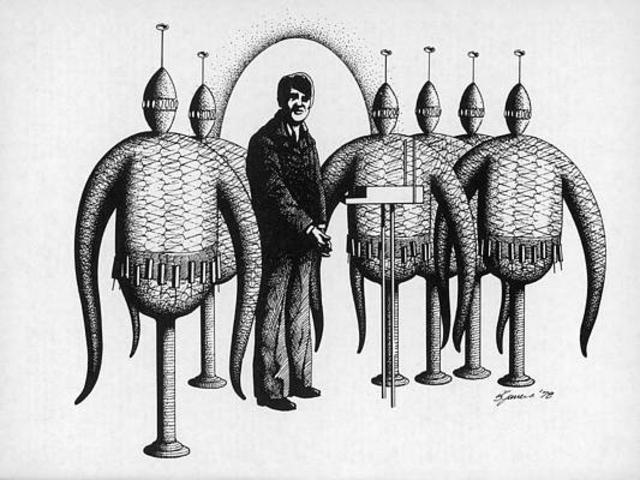