The ''Alien Attack'' on Itaipu Fort

Making Regional news in the late 1950s, this Case was considered an attack against a Brazilian military installation. However, it is hard to "declare" War against an "enemy" who may live millions of light years away! This strange Case occurred on November 4, 1957 at the Sao Paulo, Brazil military installation known as Itaipu Fort. Originally a 17th thru 18th Centuries Spanish Coastal defense Fort - it's by then old walls were still dotted with ancient cannon. The National Brazilian Army maintained it as a defensive position still. The majority of the Garrison was off for the weekend, with only a few Guards unfortunate enough to "draw the Duty" (as it were), had weekend guard mount.

At around 3:00 PM, several Guards near a Artillery emplacement noted what appeared to be two "Lights" that appeared to "drop out of the Sun - begin on a fast trajectory across Sao Paulo Bay, heading directly for the Fort. The Lights grew larger as they approached. Resembling bright Orange Balls, they were estimated at both being 40 feet in diameter. The soldiers stood in awe - at least temporarily. It was soon apparent the Objects were heading directly for the soldiers. When the Objects were roughly 1/4 mile from The Fort, all electrical power (including backup generators) went dead. The two Objects stopped roughly 200 feet above the soldiers position. As the soldiers aimed their weapons, they were "hit" with a blinding ray of heat. The two soldiers passed out. They were found alive and taken to Hospital. The Fort was secured and investigated by Brazilian Air Force Command. They could not determine just exactly what "attacked" The Fort or their soldiers. The Case was also Investigated at their request, by US Air Force "Special Investigators". They likewise could not give any answers.

Much of this was based on the evidence. Both men were treated for severe radiation poisoning and exposure. They were expected to recover. All medical photographs were naturally taken as were reputed photographs said to have been taken on the other side of Sao Paulo Bay. It was rumored that there may have been air telemetry possibly recorded of the unknown Objects. 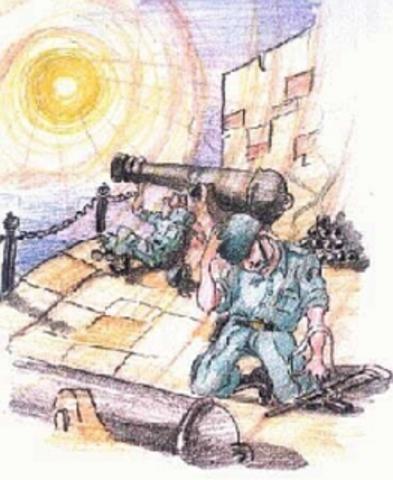