(Note: The following sighting was witnessed by The Author )

While stationed with The US Army's Second Infantry Division in The Republic of South Korea in October of 1982, I and 48 other soldier's witnesses something none of us could explain. As it would turn out, we weren't supposed too, either! A normal function for a soldier is to turn to for Morning Formation. It is at this gathering one is accounted for - and the Days Mission is announced. This Morning Formation (in Korea) was promptly at 5:45 A.M. (Monday thru Friday). On this particular October morning in 1982, if was somewhat warm. The morning sky had begun to turn a deep hazy blue. There was one medium shaped cloud formation to the West. To the East, The Toko-ri Mountains stood (still quite Green from a healthy rainy season). Barely awake, - we all stood in Ranks , waiting for The First Sergeant. After the required ceremonies , I started to notice what appeared to be a large White, circular-shaped Object begin to creep from behind The Toko-ri Mountains. It appeared to sparkle somewhat. It was BIG. Perhaps several hundred feet in diameter. The Object began to move (moderately fast), from the East to the West (towards the previously mentioned clouds).

Much later in the day, I was taking a break in my Barracks. I had a KATUSA (South Korean soldier), who lived across from me. He was watching a small portable TV set. I noticed a picture of what we saw on the Korean News Station. I asked the KATUSA what was being said (my Korean was NEVER that good). He related that the Object had been seen traveling over the entire Country and was even said to have landed in a Farmer's field. South Korean and US Fighters were called in, but the Craft took off and flew away. The next day, we were told by Command , to read the special bulletin posted from Division HQ. The memo stated that what we THOUGHT we saw, WASN'T and further we were NOT to discuss the matter! I even heard a rumor that ANY US Personnel who may have taken a photograph was to turn it over or face disciplinary action. MANY years later, I was able to find a photo of what we saw Online. (Submitted for your Enjoyment!) 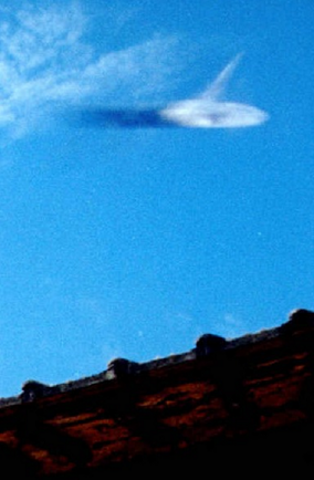