With the hundreds upon hundred of supposed Unidentified Flying Objects and phenomenon that were being reported all over The United States since 1947, The US Government decided to form a committee of Military and Civilian Experts to investigate these claims. Beginning in 1952 and dubbed Project: Blue Book , (due to it's simple blue colored front page) - the Committee investigated some 12,000 reported sightings and encounters from both Military and Civilian sources. The Report was never meant to be an on-going Mission and was determined to have an ending date , at some point in it's future. Many of the investigations were based on credibility and potential evidence collected (both physical and photographic). As with a great many of these reported sightings (coming from credible military sources ) - it was important to solve as many of these reports as was practical. VERY few of the Project Case's were listed as Unexplained or Unidentifiable for obvious reasons. The most glaring, was to present to the US Public that IF such Object do in fact exist, the Government had the ability to protect The American People from any supposed invasion . Much of the finding were forwarded to both The FBI and CIA (who likewise maintained records on the matter). In 1969, Project: Blue Book

Many more Modern views from our time, look upon Project: Blue Book as the biggest cover-up of current times (maybe even recorded history by some accounts). Many cite that the Government was well aware of Alien contact SINCE it's haphazardly approach to controlling the debacle at Roswell, New Mexico in 1947. Yet others, (declaring themselves more grounded in such matters), claim that Top Secret Government technology was to blame for the need to disprove may of the cases. Mass hysteria, faux-Celebrities, faked evidence and stories ALL helped to establish the conclusion of The Commission. In conclusion, several attempts to re-evaluate the findings of Blue Book have been attempted. Certain cases were reviewed and re-identified as unknown . However, the current US Government admits the possibility of Alien Life (but still denies the existence of Alien Craft). 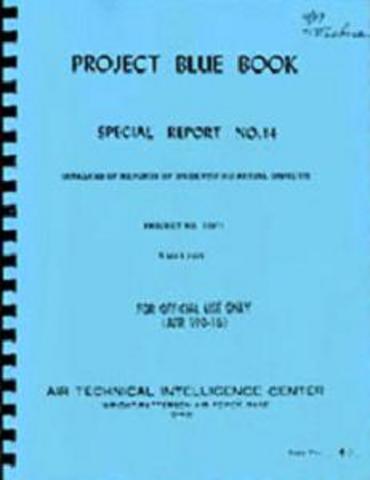