''Pope Night'' as a formerly American, Anti-Catholic Religion Festival – which could trace it's roots back to 1623. Held on November 5th, this was derived from The English ''Event'' known as ''Guy Fawkes Night'' and relating to The ''Gunpowder Plot of 1605''. Mostly seen in The Colony of Massachusetts (City of Boston), it's purpose was to decry Catholic Beliefs in ''blind authority'' to The Pope (Leader of The Catholic Church). As such, it was greatly ''supported'' by The Protestant Church Authority, and widely celebrated. In practice, a large wooden Ox Cart was selected. This bore an Effigy of both The Pope (and later a Devil). The images would be set up in a City Square and set on fire (adding to the bonfire with wood and often other pieces of Catholic regalia). Often, heavy drinking accompanied this Event, which would lead to assaults and property damage to anyone who was Catholic (or Stores and Businesses who supported them). Although some Law Enforcement tried to curb the practice, ''Pope Night'' would become a yearly event. It would last until 1776 – when it was outlawed from practice. 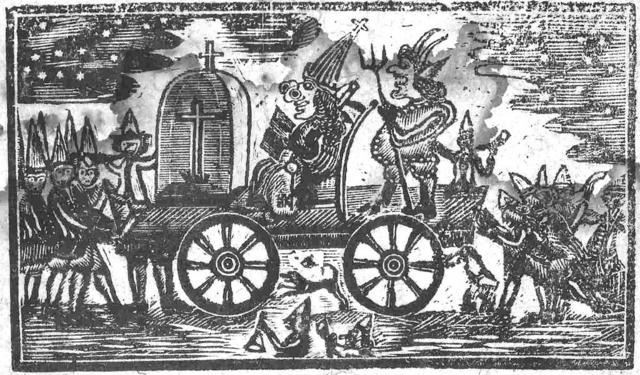