From 3rd Century B.C. - Greece comes The Gorgon known as Medusa. Gorgons were mythical female monsters, born from The Gods Phorcys and Ceto. There were initially 3 (Stheno, Euryale and of course, Medusa). Originally (as the legend goes), Medusa was the only one who was not immortal. Medusa was not originally cursed for her beauty (that comes later). She and her sisters were beautiful, but their hairdo featured a mane of serpents. Now, as per the original text , Medusa has relations with the God Poseidon (right smack in the middle of The Temple of The Goddess, Minerva). This so enrages Minerva, that she allowed Medusa to retain her beauty  but, any man foolish enough to gaze upon her would be instantly turned to stone  forever. Banished to the Island of Cestros, Medusa guarded Minerva's treasures. Naturally, brave and daring men would attempt to steal the treasure. Naturally, they all were turned to stone. Enter the hero Perseus. Using divine gifts from the gods, Perseus used a polished shield to maintain Medusa's position in his sight (apparently turning to stone doesn't work with reflections). At the right moment, Persus cuts off Medusa's head. Endgame. MUCH of the Medusa story was taken and changed by our friends The Romans. Most later Western Greek Historians tended to chose their version, as it was much more daring and exciting. The Gorgon creature would continue as a horror story for many centuries (remember, Medusa had 2 immortal sisters). This had been fodder more many books and movies over the centuries. Some more contemporary versions have our immortal gals able to appear (outwardly at least), as beautiful women. They trap handsome and rich men and then (of course) reveal their true selves. 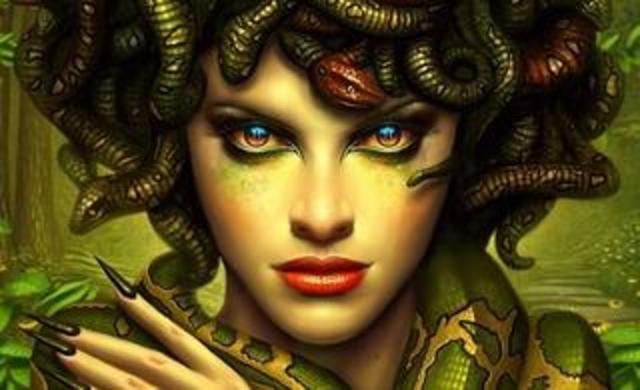