In Hindu (Indian) Moirang Religious Belief, The ''Kao''as a ''Sacred Bull'' which was seen as being the physical ''earthbound vessel'' which contained either a ''supernatural Deity'' or ''Spirit''. As a ''vehicle'' of ''a God'', The Koa was allowed to roam freely and without harm. As such, the physical appearance of The God was always presence and venerated during various yearly Religious Ceremonies. Whereas the consumption of animal flesh was (and is) seen as ''abhorrent'' to The Moirang Peoples, such Vessels where NEVEF harmed and always cared for. When The Kao ''died'' (of it's own devices), The physical corpse was also honored with cremation (as with a Human), with it's ashes being consigned to The Sacred River Ganges. 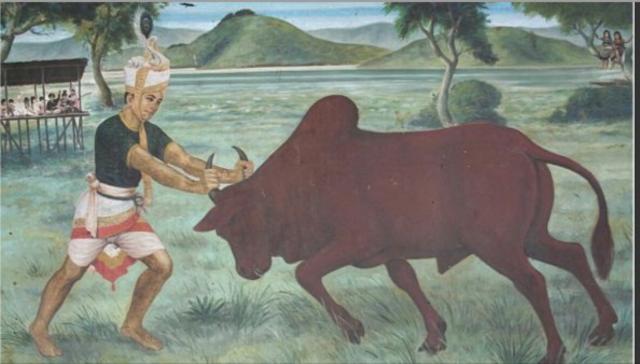