If you are of a ''certain age'', then you will well remember those poorly made, but still entertaining Horror and Actions Flicks known affectionately as ''B-Movies''. They dominated the Drive-In Movie trade and late night Movie Theaters of the 1960s thru 1980s. Their resurgence as of late leads us to one in particular was 2019s ''Horrors of War''.  The independent Film is long on over the top acting by virtual unknowns with a well worn story line......Zombies. Combined with World War II and there you have it. And while not as gory as One would imagine, for all it's ''B''-Movie faults, it is NOT unwatchable. A group of American Soldiers in France come across a German Plot to inject it's soldiers with a formula which will re-animate Them after death, or ''Ultimate'' undying Soldiers. But as we have seen TOO many times before, when your dead being a Soldier and following orders really doesn't play well. The Film's Prop Master was a genius in finding a plethora of classic WWII uniform and equipment which pass muster for any Historical Fan, and although filmed in Georgia, the locations mesh well with rural France in the 1940s. ''Horrors of War'' is silly, but entertaining.... Give It A Try! 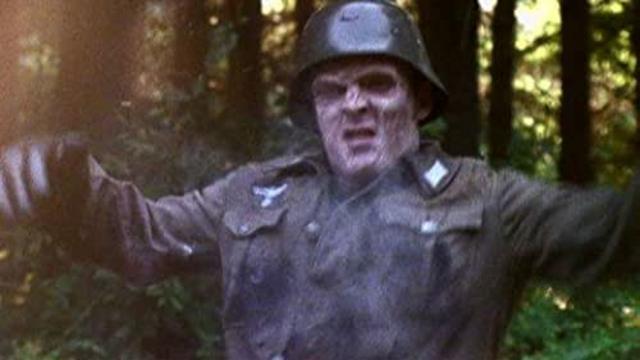