Insidious in development and usage, National Socialist Germany composed "The Law for The Prevention of Genetically Diseased Offspring" in 1933. Part of it's Eugenics Program aimed at creating a superior or "Master Race" of humans. In execution, The Law would lead to the "Action T-4" Program, which was the euthanasia of mentally and physically deformed persons within Germany. Incredulously - Other Nations were viewing such programs as well. There were 12 such Countries which conducted statistical surveys into such "Programs". As The Nazi Party saw it, the "drain" on both Government and private resources as a result of "long term care", was an issue. Such financial resources could "best be used elsewhere". Such methods were needed to "humanely end" the life of such "burdens". The addition of "social diseases" such as alcoholism and drug abuse were later included within the framework of The Law. It was even used to sterilize non-German women and men from procreation.

Various "methods" were used for genetically malformed victims. Knowing the parental objections, babies and small children were "ordered" to be examined for "health reasons". Quarantined for several weeks, it was not uncommon for them to "die of pneumonia" (at least "Officially". Such "treatments" were speculated at Sodium Penthanol overdoses. In terms of other "involuntary methods", included exposure to high levels of Gamma Rays. During many interviews by Government Officials regarding enforcement of The Nuremburg Laws of "non-Jews". Unwitting victims would sit in front of specially designed "desks". Fitted with X-Ray emitters, they would receive massive doses of Rays (which would cause sterility). Within the first year of "Operation", over 62,000 persons were euthanized. It is stated that over 400,000 perished as a result of The Law until Nazi Germany's fall in 1945. 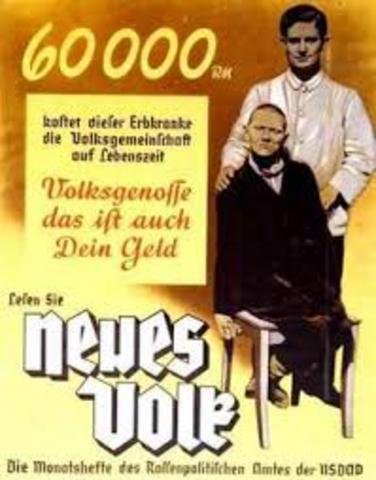