''Discovered'' in the 1950s, a strange underwater geographical anomaly exists. And while it could very well be another case of ''Weird Nature'', many UFOlogists cite that – owing to the many reported sightings of ''Lights'' and related ''Objects'' over the years in and around the Region – Malibu, California may well be known by Alien Life as ''Earthbase – Malibu''. Located 6-miles off the Coast of California (near the Coastal City of Malibu), is a massive stone structure which resembles a ''created'' entrance, leading well into the Coast and shoreline beyond. The ''roof'' of the ''structure'' is estimated to be 500-feet thick, which what appears to be several stone ''pillars'' as support. Owing to the often treacherous tidal flows in the area, full exploration is often not done (although future expeditions using robotic undersea probes may be conducted). The exact length of the so-call ''tunnel'' is still unknown. Since the 1950s, many reports of ''Lights'' and ''Craft'' of various types have been seen not only over the site, but even ''going into and out of'' the waters over the Anomaly. For a period of time in the 1960s, The US Government stated the Region was an ''excluded zone'' to fishing and boating – leading some to believe that it had nothing to do with Military Operations – but ''something else''. 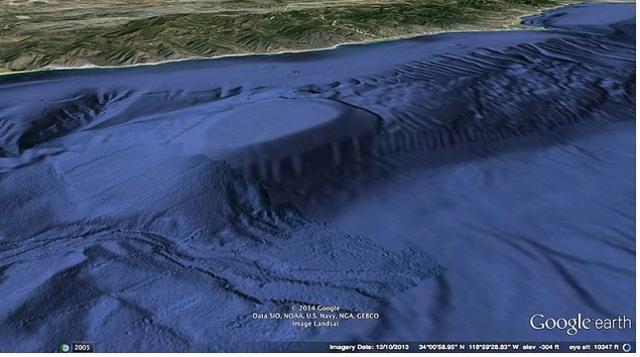