A Major topic of UFO Studies for decades (in modern research), Cattle Mutilation is a phenomenon related to supposed Alien Encounters with Animal Life. Animals (normally Cattle), are found by Ranchers, dead. While this in itself is not an unusual it is how the Animal died (and is often found), that is. In almost all reported Cases, the Animals in question appear to have been surgically operated on. The Cases are often discredited by Government or at best ignored. But the facts of many of these Cases cannot be so errantly dismissed especially when one looks deeper. The first recorded Case of unusual Cattle Mutilation was actually reported in England in 1606. Farmers reported to Royal Authorities that many of a specific Herd were found cut upon with internal organs removed. No evidence of ripping or chewing (which would be relative to a Predatory Animal). It was thought at the time that perhaps Witchcraft was the cause. Other Cases were reported throughout The World.

Fast forward to 1967 in Montana (US). The first modern reported Case of Cattle Mutilation was investigated in more detail by local Authorities. As with all over Cases, Animals appeared to have been operated on. Great precision is taken in this Procedure. Incisions made do not appear to be made by conventional scalpels or related tool. The hair or fur around the incisions appear burned , as if by a Laser Device of some form. Blood and other bodily fluids are almost always markedly absent as well. Also in most Cases, The Carcass of The Animal appears to have been dropped or placed at the location of the find. Eyes, Tongue, Ears, Heart and Lungs and most notably Reproductive Organs are most often removed. Sex of The Animal is also not apparently important. Which brings one to the reason Why The largest flap of reported Cases happened in America from 1971 to 1983, which an estimated 10,000 Head of Cattle so mutilated.

In many Cases, Cattle Mutilations happen in remote areas of The American West, North and Southwest Regions of The Country. The Regions are well known for UFO (or Lights) Sightings prior and after such Mutilations. In some Cases, Witnesses have reported actually seeing Craft lifting Animals up (via Light Beams into said Craft). Some even have reported that they have seen Animals mysteriously fall from the Sky , plummeting to the Earth from an unknown source . The speculation Many feel that Extraterrestrial life may have been studying Earth Life and perhaps were taking specimens of their experiments . Others have a darker view. It is thought that Alien Life was harvesting organs for their use (as in transplantation). The Government of course, claims that such Mutilations are better suited to Devil Worship and Black Rituals . They unfortunately cannot explain the need for such expert precision with the incisions nor the apparent skill used to extract the Organs. Although the phenomenon does not occur as much as it did, Cases of Cattle (and other Animal) Mutilation still occur throughout The World. They are mostly ignored by The Media for the most part. 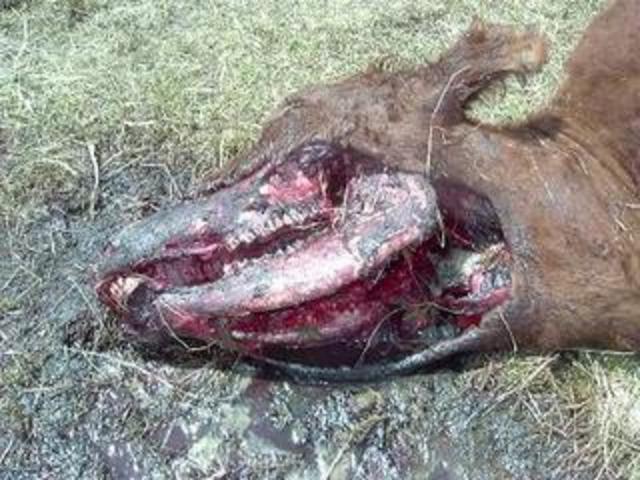