The term ''Auto de fe'' - translates to mean ''Act of Faith'' and was a 13th Century AD procedure initiated by the infamous Spanish Inquisition. A declared ''Heretic'' (publicly and after ''inducement'' – eg: torture), was moved into His or Her ''Sentencing'' stage of their Trial. Great ritual and fanfare was often given to The Auto da fe aspect. With all of a City populace present (by Church Order) gathered at large Squares or specifically designated areas, a person was allowed to profess their ''Sin'' (Heresy). If The presiding Tribunal accepted The Heretic's contrition, then their punishment would be meted out. The entire Auto da fe process was seen as a form of penitence. The ultimate punishment was (for The Spanish Inquisition), was Burning at The Stake – with Flagellation (Whipping), in Public, the least and most common of punishments given. 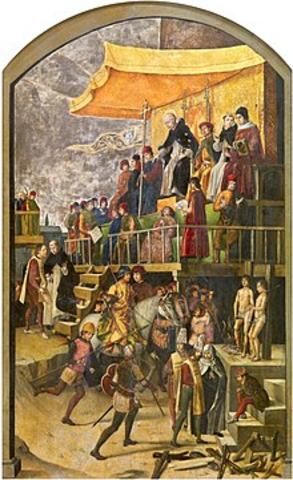