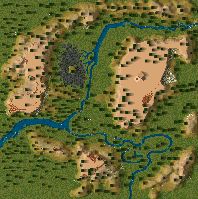 This is my first attempt at making a Stronghold Invasion map, completed with some help from users at stonghold heaven and in particular Duke Chris who suggested I upload it here. If you see something glaringly bad or wrong about it let me know and I'll try to fix it. I may or may not make any additional maps as RL and time allow.

You will have a good long time to prepare for your first invasion (possibly too long, but I was erring on the side of not allowing enough time to build up in previous versions of this map), but following that first one, you will undergo wave after wave of progressively larger and more serious invasions (multiple AI which I attempted to orchestrate for synchronous attack). Victory is achieved if you make it to 1066 (start date is 857 if memory serves) and there are not invasions of enemies left. Repeating invasions _should_ switch off at end of year 1064, so if you've killed all enemies by then it is a simple matter of fast forwarding to victory.

For a first map it is very good, the map could have better scripting, and a little shorter, I played at speed 90 for hours and hours, cut the map to 25% of the time and change the timing of the invasions would be better.

You've done a fine job making this map, I like the way you spent enough time on the terrain to make it look natural, the smoothing tool works wonders, the close iron made it a bit easy to make gold, in relation to the amount of time given, add in all the wood...

I'm not sure about your trees, good to see lots of trees, they just don't seem right, not sure why, maybe 2 things, to many of one type of tree and then a section with a different type of tree and all mostly spread out evenly.

You gave way to much time and the invasions were to small, and you need more engineers for the seige equipment, the seige equipment works better if scripted on it's own, and seiges will get lazy when you are on high ground and when there is little room to setup.

You can make restrictions in the market and type of buildings available, as you know start goods, types of troops and weapons made, and adding in some troublesome script like wheat rot, hops wevel, ect. can realy make a map more interesting and challenging.

Don't take my criticism the wrong way, the map is good, you can take what I said and make it much better, if you want to improve your map, you could send it to me and I can test it for you, then you could upgrade your submission, that's up to you, the map is good the way it is.(sirvetka,at,gmail,dot,com)

All in all a good map, congratulations on your first map, your zip file should include a story and who it's made by, as time goes by people will forget who made the map, if the story is included then no problem.

I would like to see what you will do for a Crusader war scenario, you make a good map now, lets see what you do when you have some experience.

Excellent feedback Lord Vet! Very constructive and helpful. I reckon I'll finish up the one I'm making "Thomas Hill" and try to incorporate a bit of your advice (though the scripting I may not tackle in a big way). I suspect that you veterans of the game find it easier to build up a quite good stronghold more rapidly than I do, and part of what I don't like about some of the out of box missions is that things happen too fast. My goal was to make the scenario a "long haul" sort of process, a bit like say a game of Civilization, except with time basing much slower even at 90 speed in game.

If you had to specify a "maximum" time window that would make a scenario broadly appealing, what would you say? 50 years? 100 years? 200 years?

My bias is to err on the side of making it last longer, doing what I can to the map to make growth and build up slower, and making the invasions feel much less like wave after wave of zerg rush, and more like: initially a bit of a nuisance, but addressable with a wooden palisade and a small but decent amount of troops; progressing to more threats and culminating in the final 'quarter' or so of the mission with wave after wave of major threat.

Should I reduce my stone and iron to one buildable spot each, reduce the size of early invasions a bit, and then maybe restrict the market so that somethings (namely stone) cannot be traded?

When you say send it to you, can you not open it in the editor using the one downloaded from here, or are you referring to additional maps I make in future?

I'll be glad to send it to you if that is needed for you to be able to open it in the editor, I just figured that maps downloaded from here could be opened in the editor.

Two more questions: if you restrict items from being buildable, is it possible to include events in the editor that will 'open up' the technology for those units?

I haven't looked around for any tutorials on scripting for this game, but I reckon there are some? Scripting I'm guessing is a different, and more in depth way to create in game events than the ones that are included in the in-game editor?

Just wanted to clarify one thing:

I've read through Ultima_spocks "scripting tutorial' and it mainly seems to refer to working with the in-game editor, although one of the respondents to his thread suggested that one of the "tricks" he described would've necessitated decompiling the game code back to the C++ in which it was written and making changes there.

I have no proficiency with C++, so that does not interest me. But I'm wondering:

Is the in-game editor the sum-total of readily useable "scripting" for the game?

Reason I ask is one of your comments Sir Vet:

What do you mean by that?

Glad you found my comments constructive, I'm a veteran player and have made a lot of maps for what I like to call Power players, they are on a whole new level from me, building and testing maps for them has been an experience.

For your map I just used some towers loaded with range units and later ran a wall across the front where the enemy comes in, nothing gets past! I can send you a couple of saves if you like.

For the 200 years you give, it would take about 6-8 hours at speed 90 to complete the map., maybe 40-50 years would be better. I think for the most part, most people would like to play a map for 2-3 hours at normal speed.

I found that if you script in the invasions in a long line of timed invasions instead of repeating invasions it will work better, eg: I would start with a small invasion first, with small groups of invaders setup months apart, then as you see fit maybe a few years later, another small set of invasions until you have enough to fill in the time you want the map to last.

The market can be used to restrict the game, think about how you want the player to make gold, turn off iron and stone, it takes a lot of wood to make a little gold, and maybe leave the bread turned on, with something like bread there are 3 types of units you could sell, turn off the wheat and flour, same with ale, leave hops on and turn off ale, you get the idea, use all of the restrictions to make the map play the way you want.

Send it to me, after you make enough changes and like what you have, then you can send the new updated map to me or ask for testers at the site for testing before you update it to the site.

I'm not saying that you have to update the map but if you do...and yes maps can be opened in the editor.

" if you restrict items from being buildable, is it possible to include events in the editor that will 'open up' the technology for those units? " I'm not sure, the editor is very limited, I will check it out.

Stronghold 2 has the ability to do just that.

When we talk about scripting, we are talking about the available limited scripts in the editor, no one has come up with a way to make new scripts.:-(

There is a lot of info out there on how to make maps and script them as well as modding, ask in the forums here and at HG and people will respond.

In your map you have all of the invaders in one invasion, it would work better if you put the siege equipment into their own invasion, sorry for the confusion.

2. Consider ways to bottleneck the economy by limiting market items.

3. I do like my personal maps to be long in time frame, so what I'll do is: make a short version for any map that I make that has long time frame :)

That shouldn't be too much extra to do and that guys who don't want long hours play can use the same map.