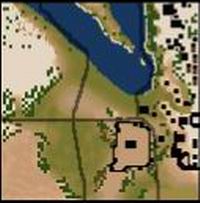 This is a small map with you in one corner and the Hawk taking the east side of the map, behind heavy defenses, there are two villages one to the North of you which you can buy and one to the East of you that the Hawk owns and is well defended, making farming for you a little harder.

Building and market ques will change as you complete some of the quests, the Lords kitchen is an important part of the game, most of your honor will come from there, not quite enough stone until you own the first village, you need stone for 3 buildings, some 4 or 5, you have enough stone for 2.

Two missions, the first one wins when you own 3 estates, there is a bit of a time limit put in to keep you focused on completing the mission, mission 2 wins when there are no more enemy on the map. The Hawk will get reinforcements as you get closer to him, don't expect the Hawk to be easy.

I tested this map, lost about 20 times and won the last 6 out of 7 tries, most of time I pounded my way to the keep from the South corner, once from the south corner with troops taking over the towers and work towards the keep and once from the middle entrance, each way had it's own difficulties, but all good fun!

I think I've told you more than enough about the map, I hope you enjoy my creation.

When Sir Herbert arrived at the keep it was dark, to dark to see the surrounding area, good thing to, he might have jumped right back on his horse and back to Bellsford where he came from. He would see soon enough in the morning what was there to greet him, square towers, walls and archers are those crossbows we see? and maybe ballistas as well, looking a little further could be seen the square and round towers of the Hawk, bristling with dangerous projectiles.

After Sir Herbert saw what was in store for him it was hard getting his food down "What have I got myself into this time?", well lets see not much gold, a little wood, not enough stone, a we little bit of food, some weapons when we build the armory, hopefully our reinforcements get here soon.

No point crying, that's not going to help, lets see, we are going to need the stone from the Northern village, we'll need honor for that, but before any of that we need wood and food, best get started on making some weapons to, no doubt the Hawk won't like us being here.

So now it's up to you the player to get your castle set up and start working towards owning 3 estates and then using your time wisely in mission 2 to end the Hawks existence for the win.