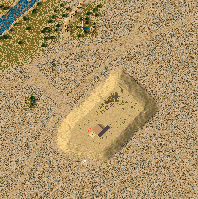 Eco-Invasion Scenario created with Stronghold Crusader ver. 1.2 (seems to be working in ver. 1.1 as well as later versions)

A "semi-accurate" reenactment of the historical battle of "Jacob's Ford", or "Vadum Iacob" as the crusaders called it, in 1179 A.D.

In October 1178, King Baldwin IV of Jerusalem and the Knights Templar began building the castle of Chastellet(*) at the site of Jacob's Ford, the only crossing place of the Jordan River and the main route from Salah ad-Din's Empire to the Kingdom of Jerusalem. The castle was only a day's march away from Damascus, Salah ad-Din's capital, and would severely undermine his authority there. At the beginning of construction Salah ad-Din was away quelling a rebellion in Lebanon. The castle was set to rival the size of Crac des Chevaliers but when Salah ad-Din returned, only the castle's first ring of walls was finished, standing ten metres high and only one tower was completed with the rest of the castle still unfinished.

In the Spring of 1179 several skirmishes took place, mainly with Salah ad-Din victorious. Baldwin retreated to Tiberias and later Jerusalem to regroup, while Salah ad-Din summoned reinforcements from northern Syria and Egypt. By August 1179 Salah ad-Din was ready to assault Jacob's Ford. Baldwin was now stationed at Tiberias, only a half-day's march away. Salah ad-Din began by bombarding the castle with arrows from the east and west and then sending specialist miners to sap the walls by filling a tunnel under the wall with brush and setting a fire to cause the roof to collapse bringing the wall down with it. The tunnel was completed on the fourth day of the siege but the fire failed due to the tunnel not being directly under the wall. Salah ad-Din was now expecting Baldwin to arrive soon and force his retreat so he needed to continue the sapping immediately but with the fire still raging it was now impossible. Salah ad-Din offered a gold coin for each man who volunteered to put the fire out which they did by carrying buckets of water from the Jordan river. The volunteers suffered heavy casualties due to the Crusaders concentrating their fire on them in an attempt to buy time for Baldwins arrival. With the fire out, the tunnel was extended and set afire again on the fifth day causing a breach through which Salah ad-Din poured his men, killing 800 of the garrison and taking a further 700 captive who he then had executed or enslaved. Salah ad-Din ordered his men to fill the castle well with the bodies of slain men and horses, spoiling the water source for many years to come and deterring reconstruction on the site. Baldwin arrived six hours later and, seeing his castle in flames, turned back. Salah ad-Din dismantled the castle, but not before a "plague" (caused by the contaminated water) ravaged his army killing ten of his commanders.

(*) Note by Korsfarer Mogens: The correct Frank (French) (crusader-)name for the castle was "Le Chastelet" - even though it wasn't a small castle! (http://en.wiktionary.org/wiki/chastelet)

I highly recommend you explore these sources before you attempt to play this map:

Contain a National Geographic video on the subject:

Information in french - including the abovementioned video in french:

(needs flash for the picture gallery)

The map is build upon an earlier map, where everything has been erased except for the AUTOBINKS script. Unfortunately, a few "artifacts" ("ghosts" of caged wardogs) may appear. Fortunately, the "artifacts" will not influence gameplay (unless you let them).

You have 20 game years to build your castle and man it with crusaders. You also have to manufacture all their equipment. It sounds like a long time, but you will need to spend it wisely! If you are successful (get to see the victory screen), you have probably gained a new perspective on Stronghold Crusader economy!

There are some restrictions in the scenario, e.g. you cannot:

Also, you should not let your population rise above 116! You can go there, but it will come at a price!

You will have to make one restriction yourself: Do NOT place any walls, towers or gates outside the top of the mount! Not that I think it will help you win the scenario, but because it is against the "spirit" of the reenactment of the battle of Vadum Iacob. You will understand if you explore the references mentioned above.

If you abide to the "rules", you will not encounter any hardships* - except for a few enemy scouts - before august 1179.

After august 1179 your production will plummet! Do NOT expect to "catch up" during the battle. If you are not prepared when Salah ad-Din attacks, you will have to face the consequences, and in a very unforgiving manner! Besides, at this point there is probably not much time for attending matters of economy, as you are probably busy repositioning your men on the castle walls in a desperate attempt to fill the rapidly increasing holes in your defense! In short: Expect very limited troop production after august 1179.

Salah ad-Din and his MIGHTY army will attack in august 1179 (as you might have guessed). Good advise:

[li]do NOT expect to win this scenario in your first attempt, no matter how good you are[/li]

Will you do better than the Knights Templar garrison? Only time will tell! If you fail, and the enemy troops starts pouring into your castle, just sit back, relax, and enjoy the inevitable. It's a grand spectacle! I've tried it a "few" times. :-)

Thanks to Lord_of_Hell for valuable input!

You can find a discussion on this scenario in the forums: