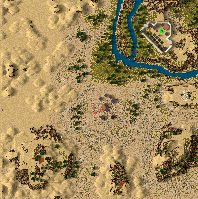 And.. Sorry for English mistake..

Hello, Highness. Let me tell you that since my capture and the months of imprisonment that followed, I am wholeheartedly "in your camp". It's a pleasure to be away from these smelly and unhealthy crusaders, that's for sure. The attacks of Reynald of Chatillon against our caravans trading is no longer tolerable and the Great Saladin to decide to besiege Kerak, however he needs a distractions to clear the garrison. His spies have run the rumor of a gold convoy for the reconstruction of one of Saladin's palaces, it is obviously a lure and there will be no gold. This big greedy pig of Renault will suddenly fall on the panel and send his troops plunder the palace .. Saladin my task to assist you by my knowledge of the crusaders. I beg you to quickly rebuild the walls of the palace while waiting for the scouts cross and recruit as soon as possible some fire launcher to bring hell to these looters. Hold on and Kerak will fall!

The diversion worked perfectly, Highness. Saladin was able to punish Reynald, the Jerusalem forces came to his rescue, and Saladin had to negotiate with the Leper King of Jerusalem, who promised to punish Reynald for his crimes. In spite of all his wisdom, Lord Saladin sends you to gather our forces for the coming war. Conscious of dissensions in his own camp, Saladin. Here we are on the land of Sultan Abdul. A treacherous Caliph, the Vulture, has only recently attacked his lands. You must settle in the city at the foot of the Sultan's Palace and start producing weapons for his troops. We have allowed this Vulture, but he does not seem to recognize the authority of Saladin. Pass all these traitors by the edge of the sword. Saladin has done you the honor to entrust you with the command of some of these legendary horsemen. Make good use.

The Caliph is less proud now! Did he really hope to oppose the Great Saladin? Be that as it may His magnificence charges you to continue your march and to punish the traitor. The Sultan, grateful, you entrusted many men to take the castle opponents. Use them wisely, but beware you are a dangerous enemy and these Greek fires have repelled many opponents .. Once this is done quickly join Saladin. In fact recent events have greatly accelerated hostilities, The leper King is dead and it is Guy de Lusignan who took power in Jerusalem. And his first action was to free this dog from Reynald of Chatillon.

Guy de Lusignan, this new king is impetuous and unwise, the great Saladin has already planned the scene of the final confrontation. He wants to force the crusaders to advance into the desert with too little water supply, and it is Hattin who intends to crush them thirsty and exhausted. What an honor it would have been to participate to this battle Sir .. Helas Saladin send us elsewhere, where your qualities will be better used. The city of Janaba, one of the breadbasket supplying our army, is besieged by the Franks. Guy seems to have sent part of his army commanded by the Marshall, on of his faithful knight. Once Saladin's assassins have brought you into the city, you must break the siege as soon as possible. Our food is important but not eternal you will have to be very careful. Hold on, and soon we will march on Jerusalem!

What a victory my lord! The Crusaders have fled the battlefield like a flock of goats, the Marshall at their head! As for Saladin, he forced the crusaders into the desert with too little water supply, and it was Hattin who crushed the thirsty and exhausted crusader army. Guy de Lusignan was captured and Reynald executed. What a pity we could not have seen that Highness! Our Sultan Saladin is now marching on Jerusalem at the head of his army. What a stroke of fate he sends you elsewhere. His spies found tracks of the Marshall at Nablus Castle. From there he probably hopes to assault our supply caravans for break the siege of Jerusalem .. The Marshall's knights may counter attacks quickly and i suggest you to build an « island » defence with our slaves and use our new fire ballista. Install your camp in the city near the castle and destroy this disbeliever once and for all. Saladin orders it!

Saladin knew how to be magnanimous towards the crusaders who defended Jerusalem heroically. He allowed them and all Christians to leave the city without damage. Could this act of peace have banished the war from these lands forever? Nothing is less certain .. Still, your loyal services have been much appreciated by the Grand Saladin, a place of choice in his new government probably waiting for you? I hope you will not forget your faithful scribe, my lord ..