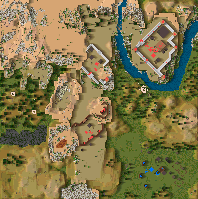 Chapter 2 of the Military campaign after Stronghold 1

Remake of Stronghold 3 with some changes in history

You will have to fight against the jackal and thwart the return of the Wolf.

The Rats were defeated and the North is free! But the news coming from the South quickly deceived us.

The Rats quickly talked and the situation was worse than anything! The Wolf was back .. Cure of those mortal wounded .. Revenged on the other side of the sea at the head of an army furnished by these allies, the enemies of our kingdom.

The representative of these new allies calls him the Jackal, he has already made a mistake in entrusting his troops from the North to the Rats, but now he is the one we are going to face.

Our allies will launch simultaneous assaults on the forts at the borders of these lands. Everyone's part. I have to knock down this fort and open the passage.

The Pig's childs .. The King should not have spared them .. Unlike Rats who had fled, they prospered. Count Porknuckle chose the path of arms and his brother chose religion.

The assaults on the Chacal fort were a success, I went on horseback to join a potential allies here .. Lady Raven, daughter of the Raven, the former ally of the shadow of the Wolf, returned in the right way.

First victim of the return of the Wolf. The ancestral castle of the Raven has been spared for the moment but now the Count is interfering dangeurement with the lady belel who is there. It will be necessary to fortify the castle and hold good!

The Pig's troops have been annihilated! Lady Raven is grateful to us and has entrusted us with very valuable information.

The capital has been seated for months by the Jackal but the loss of these counties to the north and the failure of the Pigs should decide him to move.

Sir Longarm, my former companion, as well as many other loyal lords, are imprisoned in a castle by the sea.

The Bishop had already gone away with these men in order to carry out reprisals. Take the command of a small army of siege and quickly capture this castle! We must save Sir Longarm!

9 A slice of Bacon

The prison is ours, but the Bishop has fled by boat! This dog had already carried out a number of executions and torture, but at the same time Sir Longarm was unworthy.

I had trouble recognizing my old mentor. So much he looked old and tired. The prison leaves its mark on the men .. However its determination was always as strong.

The Pig forces are defeated and the Jackal has started, leaving only a small army to lay siege to the capital. Meanwhile, Ironhead asked me the honor of finishing the Count Porknuckles.

There are some simple pleasures which can not be denied to my allies.

Count Porknuckle has succumbed only the Bishop remains! He entrenched himself in his palace. It is well defended and reinforcements of the Jackal comes to its rescue. This fight promises to be epic.

We must fortify our base camp, then once take one by one the forts staking the road to the Palace. The fall of this corrupt priest will mark the liberation of the Middle lands!

We'll soon debug the Wolf and slash the head of this cursed Jackal!