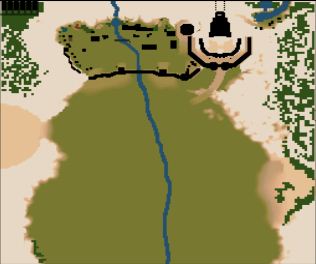 I personally made this map not for other people but for myself. This is a tribute for the movie LOTR 2 towers and for the game stronghold 2. First I was playing stronghold 2 then a few hours I got bored so I tried map editor and gave it a shot if can create something different but it takes time to imagine a map. Then helms deep pops up, I tried to make one but it was very hard so I stop and search for pictures for reference and made a sketch first. I tested every part of the game like the attacking force, the reinforcements (elves, rohan riders), their formations, AI behavior (attacks any part of the castle) the timing, building availability, resources, events. If it will all goes well. Even while sleeping I can't stop thinking about what did I miss and map designs inside and outside the castle unstoppably pops up in my brain every night. I dunno what happened to me or what did I eat to make this. I uploaded this to share my piece of art to stronghold 2 players. I hope everyone will enjoy playing this same as me xD

Helm's Deeph is said to be the unbreachable castle of Rohan is at war against a massive army of 10,000. Rohan king believes that the fortress could withstand any attack like the previous battles. with only 700 troops, you must help him defend the castle and it's people. Just like in the movie, you must hold the enemies till aid comes.

This 2 mission map primarily focuses on how you're going to defend your castle against an army of 10,000 and survive till aid comes using only 400 men plus 500 elves with selected building availability and resources.

Elves: bowmen,swordsmen and the leader knight.

First you need to survive or fight your way to reach your castle. On this mission you have the time to prepare your defenses. You need to gather stones for the engineers for them to repair walls for incoming sieges. Position your troops in the walls, specially walls that has higher possibilities for ladders. Don't forget that you have limited units like engineers so use them wisely. You will be reinforced with 400 units. (assume that this are the elves)

This is the time where the army of 10,000 arrives and attack your castle. All you have to do is survive by any means necessary till help comes.

You can also change the followings:

the model of each unit if you want.

Doing this will add more realistic feeling closer to the movie and for greater enjoyment. It's really all up to you. 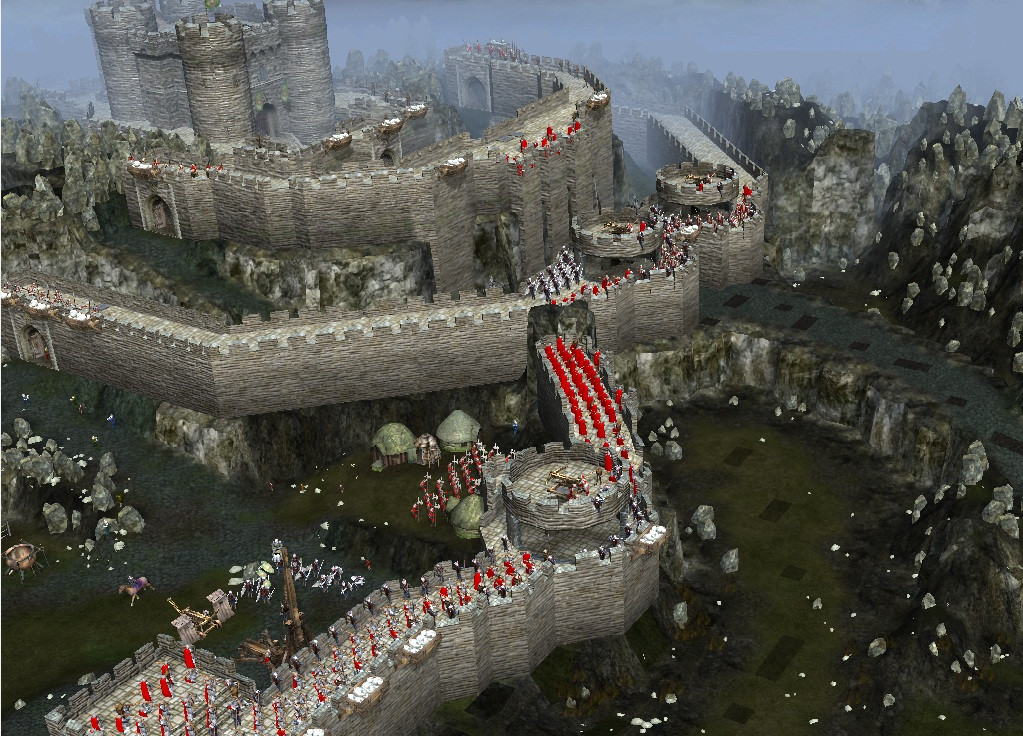 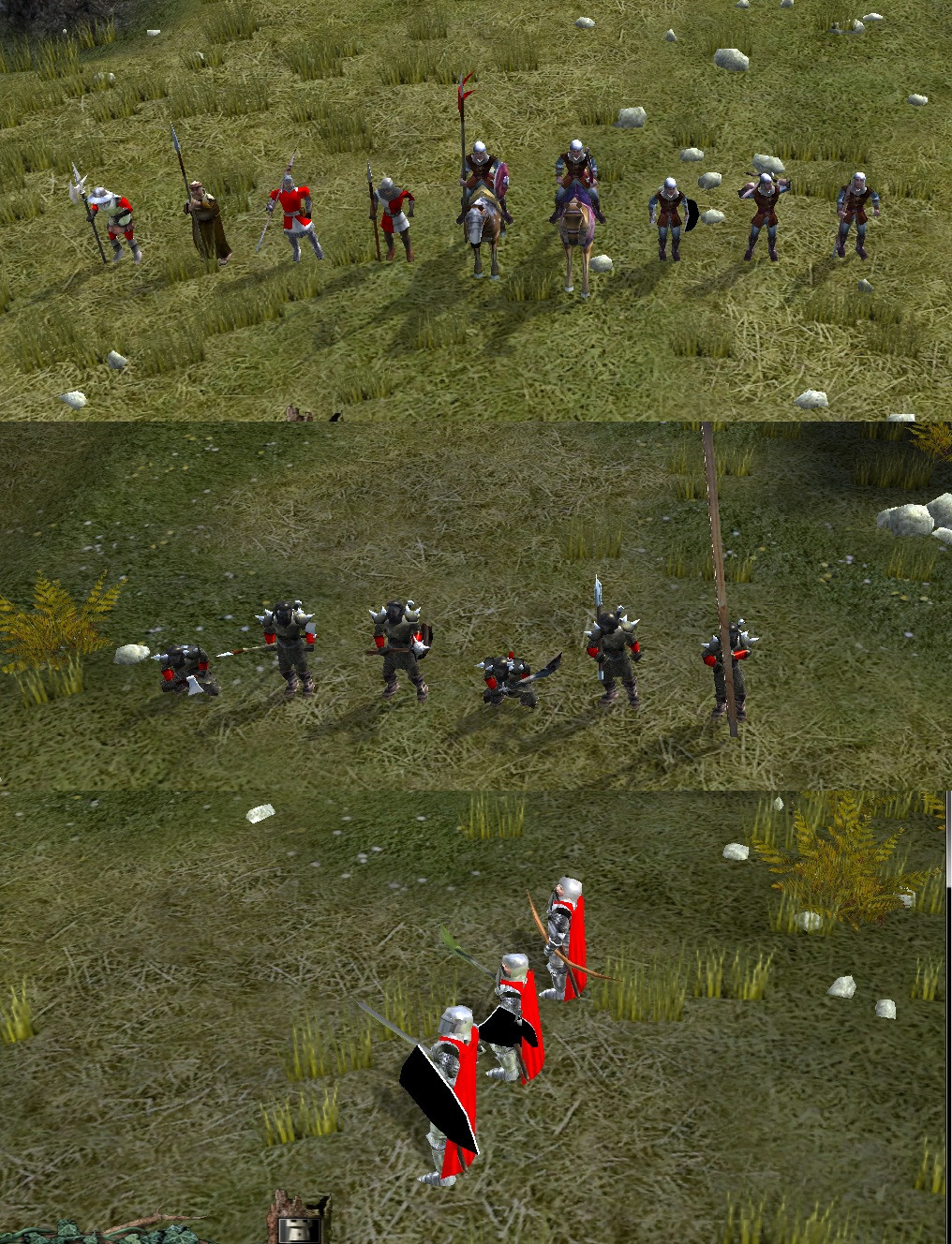 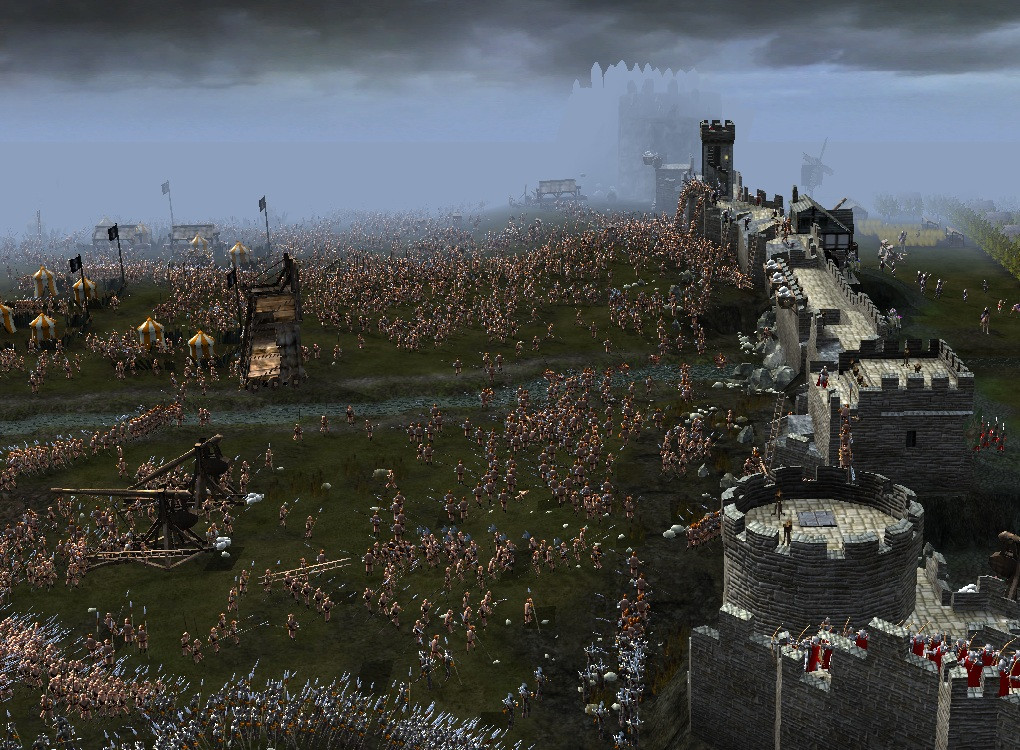 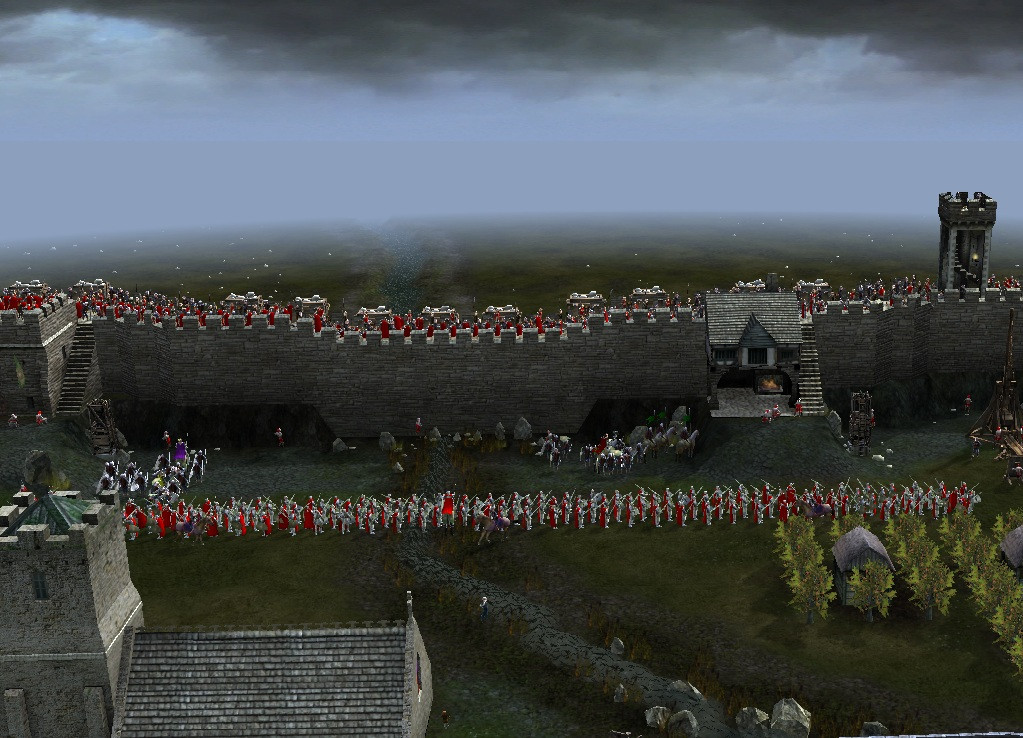 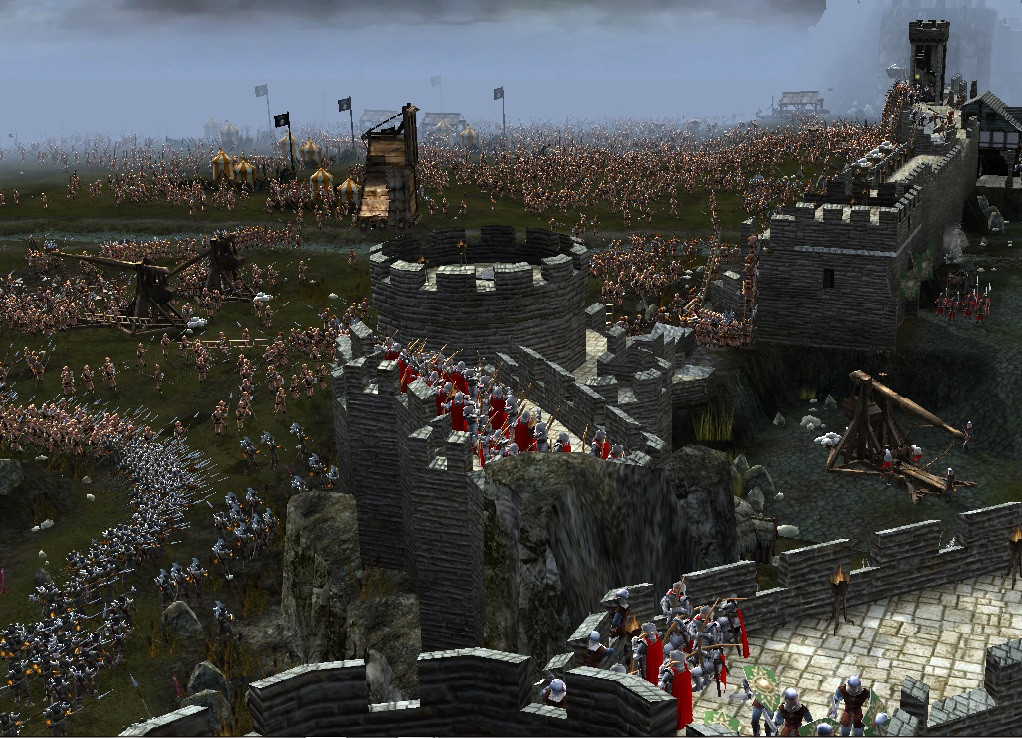 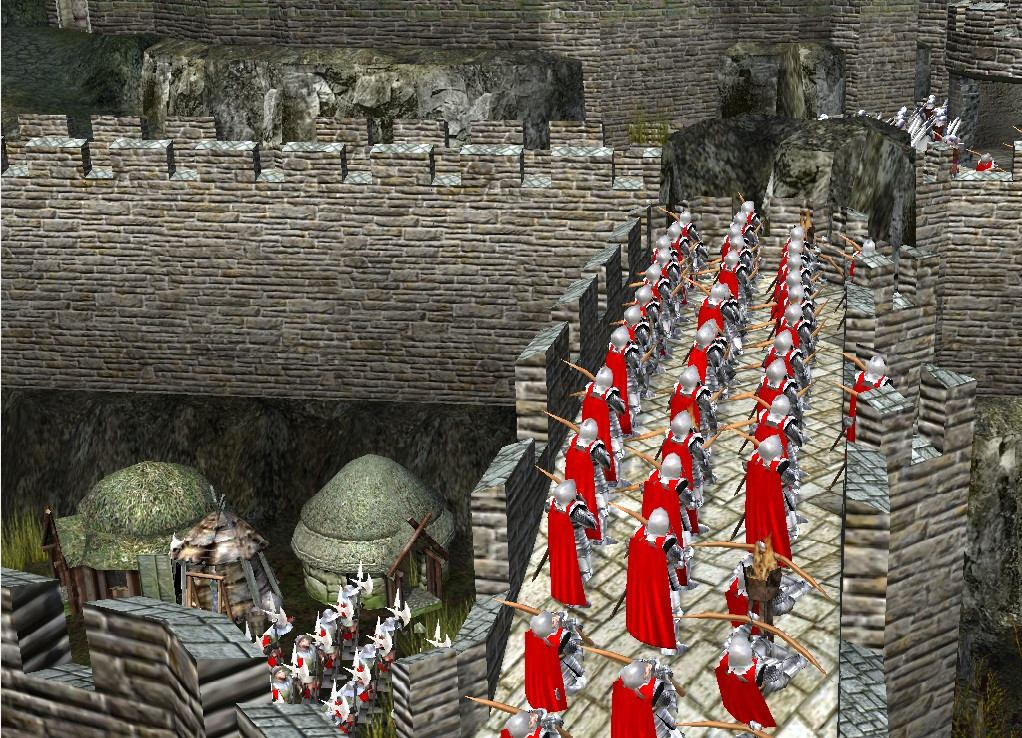 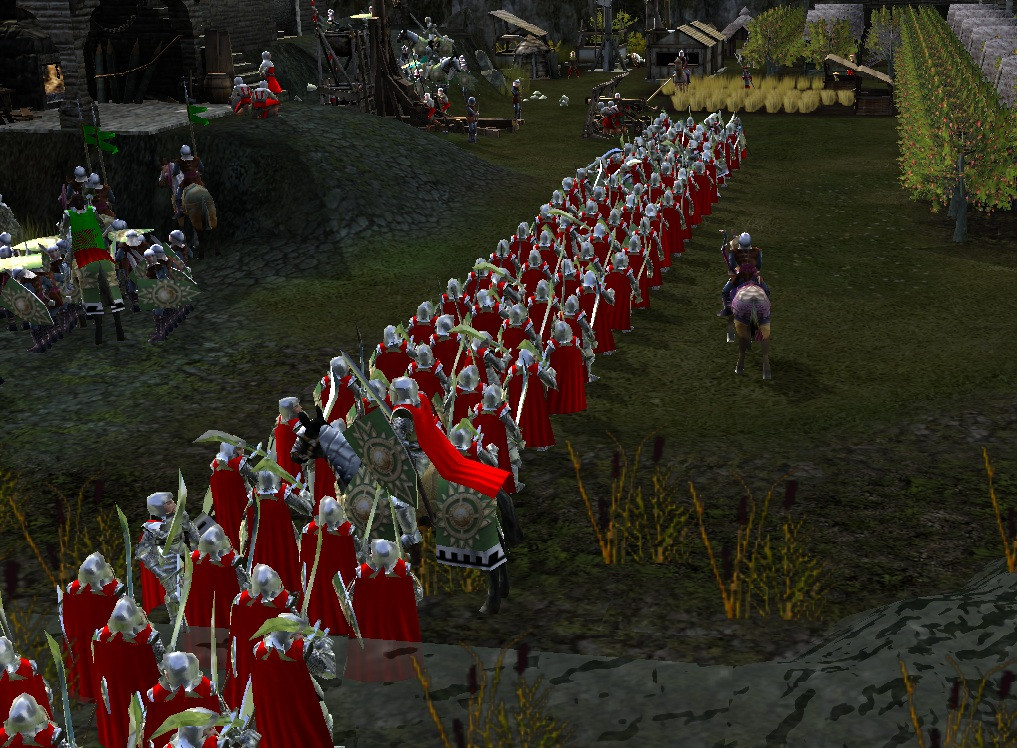 Please leave your comments and suggestions about the map if there is any problem or maybe I forgot or miss something so I can fix and update it immediately. This will inspire me to create more maps.

Wow! This is one amazing map! I haven't had a chance to properly play the map yet, but just from checking it I found this out. This is so much better than the version I created - The scenery is so perfect, and the way you've incorporated the caves in was just amazing.

The fact you've just left wall instead of trying to incorporate the drain/only weakness into it IMO probably makes it the most realistic version of Helm's Deep I've seen.

I'll give your file a full review later, but I just thought I'd let you know how good it is first. :)

By creating this map I first put in my mind that I can't really copy all the details of Helm's Deep on the movie because this game is stronghold but still if you play the map I'm sure you will get the same feeling as of defending the real Helm's Deep. You can't say the difference unless you've play the game.

The troops disappear down the walls. (If you have, I'll upgrade to the 1.4.1 version to play it don't worry.)

That will be why, it's higher than 1.3.1. I'll upgrade now to 1.4 and play the file. I hope to give your file the review by Sunday Evening at the latest.

This is much better than any Helms Deep I could create. And the way you have integrated the caves with the Castle + landscape was just amazing. Much better than I have. I have often thought myself about doing it, but could never find a way - I didn't know it would be so simple to add in!

And the way you have really barricaded the entrance to the caves through the use of the Sally Port makes it very good indeed. On other versions of Helms Deep I've seen, people use a "Main Gate" for the first gate, and didn't think it would work with any other type of gatehouse - that was before I seen your version!

You have clearly though about how to add the towers and the gate in effectively, and it looks much better than I ever thought it would with a Small Gatehouse. The pathway leading up to the gate is very accurate to the movie itself, and is the perfect scale to the gatehouse. You've also used Yellek's high wall trick from Stronghold 2 Heaven for the tower. This makes it look much more realistic and impressive. I also didn't realise there were that many gatehouses in the movie. You are very good at placing waterfalls, that's something which brightens a map up and makes it a lot better, and also you are good at placing waves at the bottom of the waterfall.

I just think that it's a pity that the keeps have to be placed for each lord. (Nothing can be done for that though sadly). I didn't notice the Sally Port in the main wall itself at first, but that was a good touch, it allowed me to get out to the other side of the river.

I'm also very pleased that you placed a different keep to that default one! :) It's a much better keep, and to be honest I see Grand Keeps so little in maps it made a very nice change. You must have a very good memory, or have kept looking at the file whilst doing it, it's everything there is in it and more!

It's also a nice map because it allows you to come into contact with the Civilian part of the game, and in other versions that is something I don't see.

In fact, it's probably the most realistic version of it I've ever seen.

The objectives for the first mission were good, they helped build up tension for the final battle and helped you to navigate throughout the landscape and get used to it for the second mission. I also think the Assassins were a good choice for the elven reinforcements as they have similar blades and look similar.

Starting with such low resources was a challenge, but was a good one at that - it made it so much harder. You've also blended the textures together well, I especially liked the fact that there were lighter textures near the edges of the map (where the Reinforcements come from, and where the charge comes from at the end of mission 2.

But wow! The second mission: That was outstanding!

That invasion was massive! The sieges were wonderfully co-ordinated, it must have took you an awful long time to figure that out. And they just kept coming and coming! This had go to be one of the best defence maps I've ever seen for this game. I'm going to try and add it (fully functional) into the Siege menu, if I find a way, I'll let you know.

I really enjoyed it, one of the best LOTR maps I've ever played on. I don't know what your overall rating is yet (It averages it now) but I'm sure it'll be high. This makes me wonder what else you have yet to show us! :)

Honestly I really don't have any personal computer so it's like a have plenty of time to think about a map than to create it but it's not that bad, in fact it helps me to build a map on a less stressful way :D

My next map would be Minas Tirith but sadly I can't start it now. I still need to look for a job first then buy a computer.

Many thanks to your comment Lord_Chris, I deeply appreciate it and I'm happy that you feel the same way how I feel about this map :D

I hope everyone could try this hehe

Well, I wish you good look in searching for a job, I hope you can get a computer soon.

That's interesting actually, I just do my maps, you plan them out. That's one thing that's never worked for me ;)

I'll see if @fellowslothb will record the gameplay and post it on You Tube if you like?

Sure why not? It will make me more happy :D

thank you in advance, I will wait for that.

Can you give me the link so I can also view it?