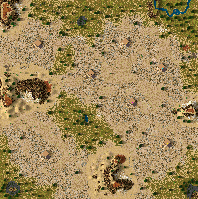 This is a 7 players map large enough for advance ai to build their large castle. This map is meant to be played 1 vs 6. Ai lords works really well in this map. Protect your quarries and mines well or those are going to be destroyed by your enemies while they were laughing at you!

Well, hope you enjoy this map. Comments and review are welcomed :)

*update : now with a story

"Since i decide to leave my homeland 12 years ago to became a mercenary in this desert, i took part in a lot of war. I was hired by a really good Lord/Sultan and be a part of his army. But 3 years after i joined his army, the Lord/Sultan got killed by his sworn enemies while his city got sieged. Me and a few of his men managed to escaped before the savage Lord/Sultan killed execute everyone in his army and burn the city and its people to the ground"

"After that accident happen, my former master loyal army decide to became a mercenary group for those who needs our service. We faced a lot of tough war. I met a lot of good but mostly bad warlord in my time as a freelance mercenary. From the cowardly fool like Duc De Puce or as the most people called him, "The Rat", to the fearsome and conniving Duc Volpe or as we known as "The Wolf" for his cold, calculating and fearsome personality. Both of them hails from a far away kingdom. They went into the desert to expand their territroy"

"Meanwhile, i also managed to met a lot of desert lords. From the cruel, savages vindictive Caliph to the kind and wise Saladin. Both are a genius tactician. Expecially Saladin"

"Now after 9 years fighting in this desert, me and most of my loyal men decide to end our life as a mercenary. We already seen enough war and blood spoiled. We arrive at this mysterious land. It was full of mineral albeit kinda far and has a nice space of oasis for our people farm. I thought this was a perfect place to make a settlement for our people. But turns out...i was wrong"

"A week later, one of my men whos doing his job as a lumberjack came to me with a worried look in his face. He report that we are not alone in this land. There is 6 other fortress near hear. I thought this was a good news since i thought maybe we can create an alliance and a trade route between us, so i told ask him why he look so worried. He said that according to their banner and flag that he saw, those 6 other Lords are our sworn enemies. He also saw a couple of siege enggines being constructed and it looks a lot like they were preparing for a war"

"I was stunned because of that. I didn't believe me and my men have to go to war again..But this time the motive is different. Its not for money..But its for our own life..."