Depending on your point of view of things, this is arguably the most difficult mission in the whole Stronghold 2 peace campaign. There is a lot to do and a ridiculously short 40 months to do it in. So do not be suprised if you take several attempts to complete this mission. This mission is a test of everything you have learned so far and more, introducing new concepts such as crime.

At the start of the mission there are two objectives. The first is to attain a population of 80, and the second is to acquire 200 Honour. You should pretty much have already acquired the Honour already, so this shouldn't be a problem at all. The real issue here is population, and time is very short.

Tip: Just because you have to acquire 80 population, that does not mean all 80 peasants need to be in work. Workers around the campfire will also count towards the goal figure of 80, making things a lot easier. Remember however that only 24 peasants can gather around the campfire at any one time, so you should have enough jobs provided to keep increasing the number of peasants arriving at the castle even if you don't fill all 24. As an additional tip, you can try pausing the game while building if you continue to struggle with this mission. This will save game time, especially while you restructure things, yet will not count towards the 40 months dealine.

Onto the mission at hand, a simple cursory overview of Edwin's castle proves that it is extremely poorly constructed and will take some time to put right again. Begin by immediately erasing the second wall, Treasury, Castle Kitchen and Gatehouse. Next, remove the Barracks, Armoury and Poleturner, Fletcher and Armourer Workshops. Things should look better already, but you still need to push on. Place two Apple Farms and three Hunter Posts near the Granary.

Start by purchasing 20 Apples immediately which will cover the shortfall in food for the time being. Now, place a Guard Post next to your Granary, and buy all the wood you can with all the gold still available. Place a Gong Pit and Falconer's Post, and at least one way to rehabilitate prisoners. It's better if there are two. I recommend placing a Gibbet or Humiliation Mask, because they take longer to rehabilitate the criminal and therefore, you receive more Honour. Note that some of the more brutal or advanced ways of rehabilitation also require a Torturer's Guild, and in the confined space of this castle, it may not be a good idea to place those.

Next, head over to Edwin's neutral estate (Charvon Wingly) and start sending shipments of 50 Apples at a time to Edwin's castle. This will also help to cover the shortfall in food, and will later help you to start increasing ration levels. It should easily have over 1,000 Apples. Now you have a preliminary food production sorted, you can remove all of those Mills and Bakeries which are taking up space next to Edwin's Hovels. In their place, build another Apple Farm and two Hunter Posts near the Granary.

Meanwhile, outside of the castle, start mass placing saw pits to increase your wood production. Back over next to Edwin's Hovels, and I recommend a slight re-organisation. Delete all of the Hovels, and place them all again in a more confined way. You should still have spare wood, so I recommend placing another three Hovels for the moment. Next, place a Castle Kitchen near the Keep. Once you get your wood shipments starting to come in, you should easily be able to start placing some feast production buildings. By now, the castle should be looking something like this: 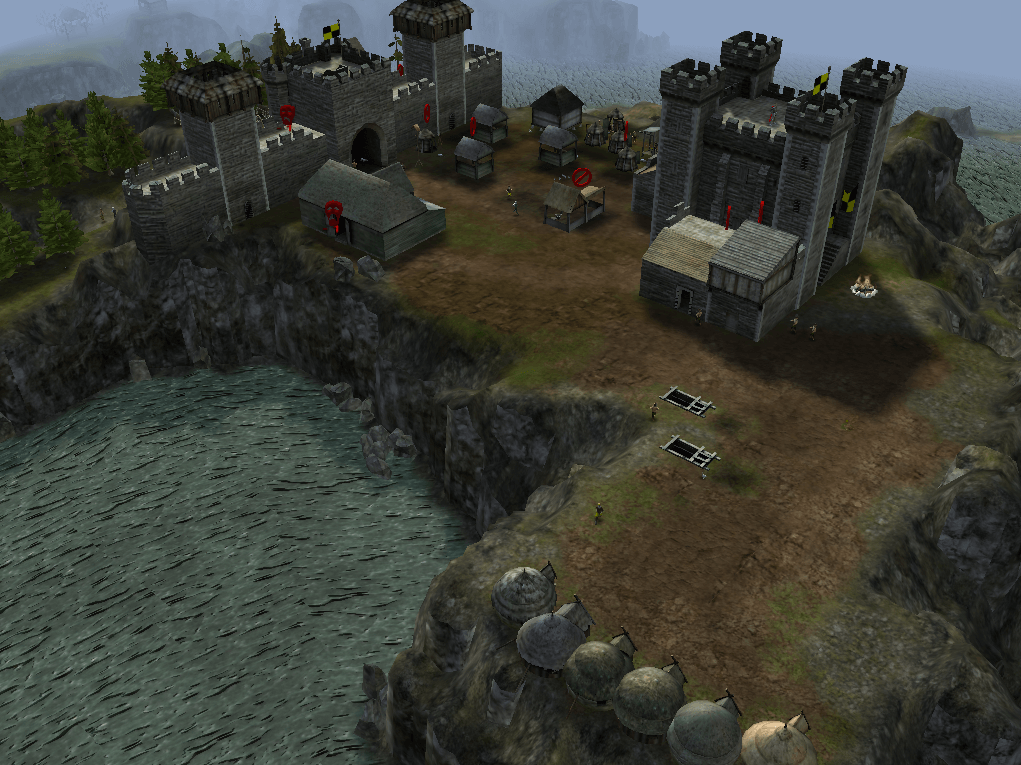 When your gold increases enough (due to taxation from your estates) I would suggest buying some stone and placeing the Treasury back in the Castle again. Keep it close to the keep, but in a more compact way than before where it doesn't take up as much space. You will now be able to adjust the tax level when your popularity starts increasing again. For now however, you will probably be struggling to get the gong and rats under control, so set the tax level to a small bribe. The money you receive from taxation will be more than enough to keep this going over for now. If you're still struggling on your popularity, double this to a large bribe on a temporary basis, although you will have to watch these levels carefully as your population grows.

Using the Inn outside of Edwin's castle, purchase some Ale when you have a chance and set the Inn ration level to normal. This will prodive another big boost for popularity until you can get the rats and gong sorted. By this point, you should also be getting a shipment of Apples from your neighbouring estate, so as soon as this arrives increase the Granary rations to extra. These few steps will provide critical relief in almost immediately raising your popularity back to sensible levels again. Once this has been done, you can heave a huge sigh of relief- that's the hardest part of this mission done. Now the task is to build, build and build. Start by placing another Apple Farm, Dairy Farm and three more Hunter Posts next to your Granary.

Place another Gong Pit and Falconer's Post next to your Keep, and another one of each next to your Hovels. This should help with preliminarily clearing any Gong and rats, but will take a few minutes for the peasants to filter through. In the meantime, check your ration levels, gold levels and ale levels. You need to make sure that all of your resources are enough to cover your increased population. It probably is, so when you have enough Gold, place a Travelling Fair. Then purchase an inccreased amount of Ale.

Now that you have a proper economy about to start, you can decrease your tax level back to a small bribe if you were previously using a large bribe. Or, if your popularity allows, you can even set your tax level to none again. By now your efforts should really be starting to pay off. 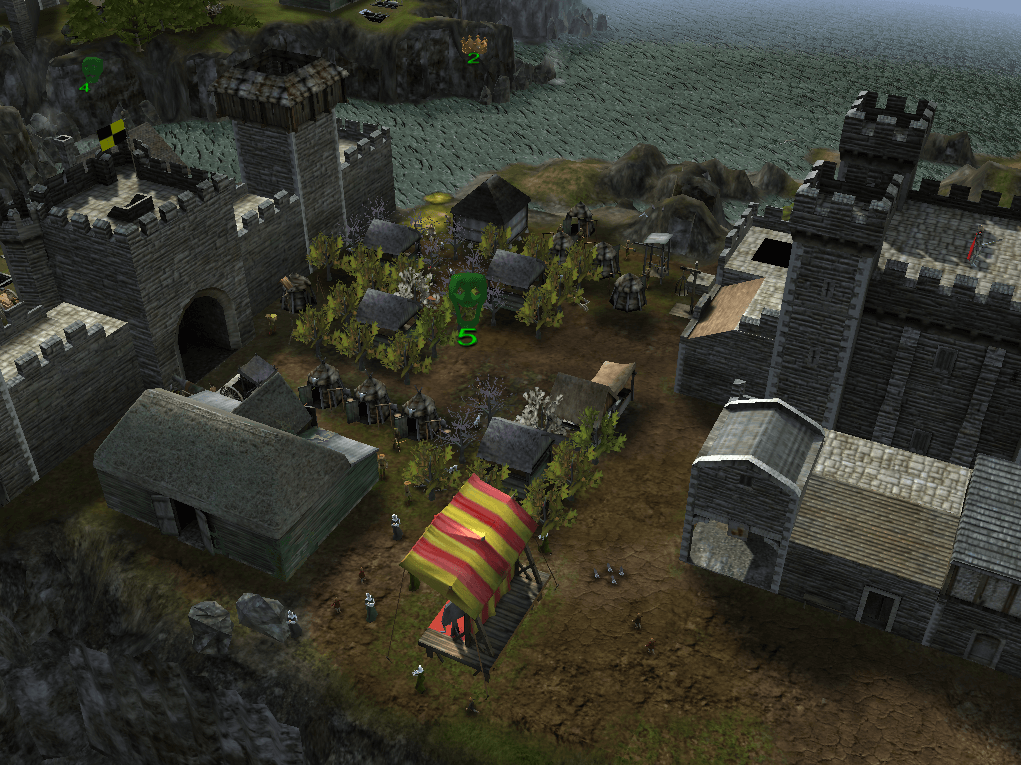 This is now the time when you can probably reduce your bribe level altogether. It's also the time when you can start to make your ale industry self-reliant too, rather then you needing to purchase ale all the time. Place two Hops Farms and two Breweries, which should keep this going by itself. And if you haven't yet had a chance, now would be a good chance to build some buildings for the Lord's Kitchen too. Place a vegetable garden and two pig farms, but be wary of space. There are many smaller buildings you can place to fill up as much space as some of the large buildings do.

Place another four Hovels, which should take you just over the population limit of 80. Now all you need to do is get there. Fill in as much spare space as possible with Hunter Posts, and remember that you can always place additional saw pits outside of the castle walls. In fact if need be, you can also erase the remaining wall and towers entirely if it will help to provide better space for buildings. This should be just about all you have to do in order to win the game now at this point. 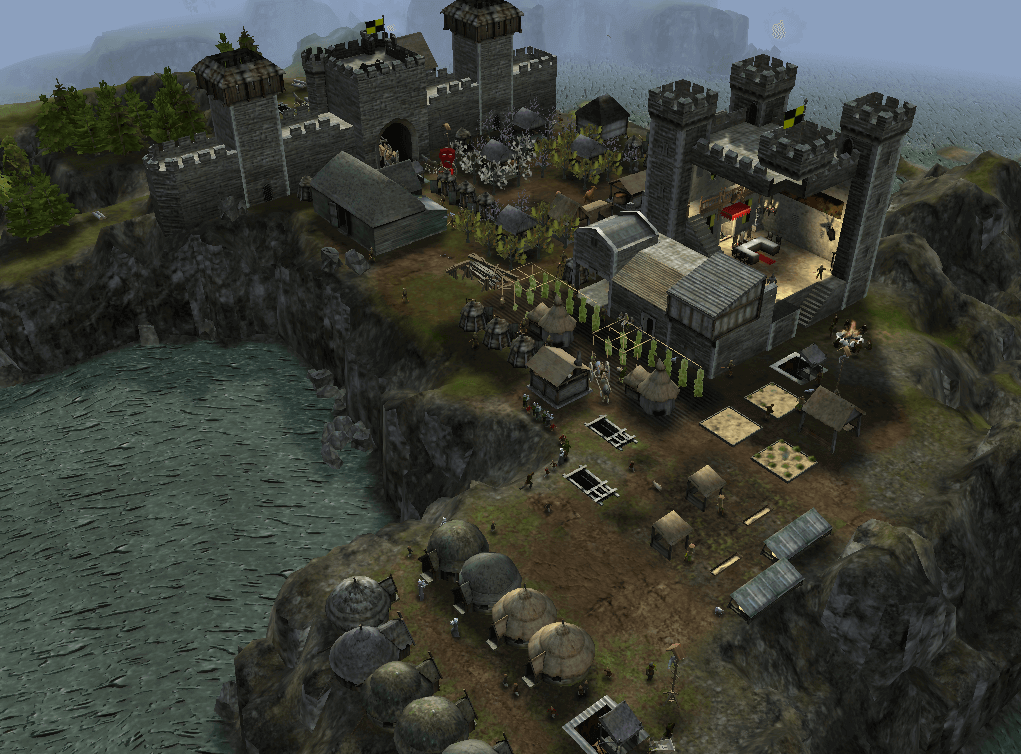 In the screenshot above, I managed to complete the mission in just 23 months using the guidance available from this walkthrough. With a bit of practice, you will reach the end goal, so while this mission may at first seem tough, once you get a grip on the economy it becomes significantly easier. Now, remember to save you game, and let's get onto the final chapter of this campaign! You can also download a saved game of this mission available here from the downloads section.