Crime is a new concept in Stronghold 2 which has been introduced. It appears to have been completely removed in later installments of the series, probably due to the fact it was not a very popular element of the game. Supposing Crime production is turned on in a custom map, or, you are playing a Kingmaker game, workers in your Castle will constantly turn to a life of crime, stealing from the Granary. No matter how harsh the rehabilitation method is, you cannot stop this. Stolen food can never be recovered, even if you do eventually catch the criminal and rehabilitate them. 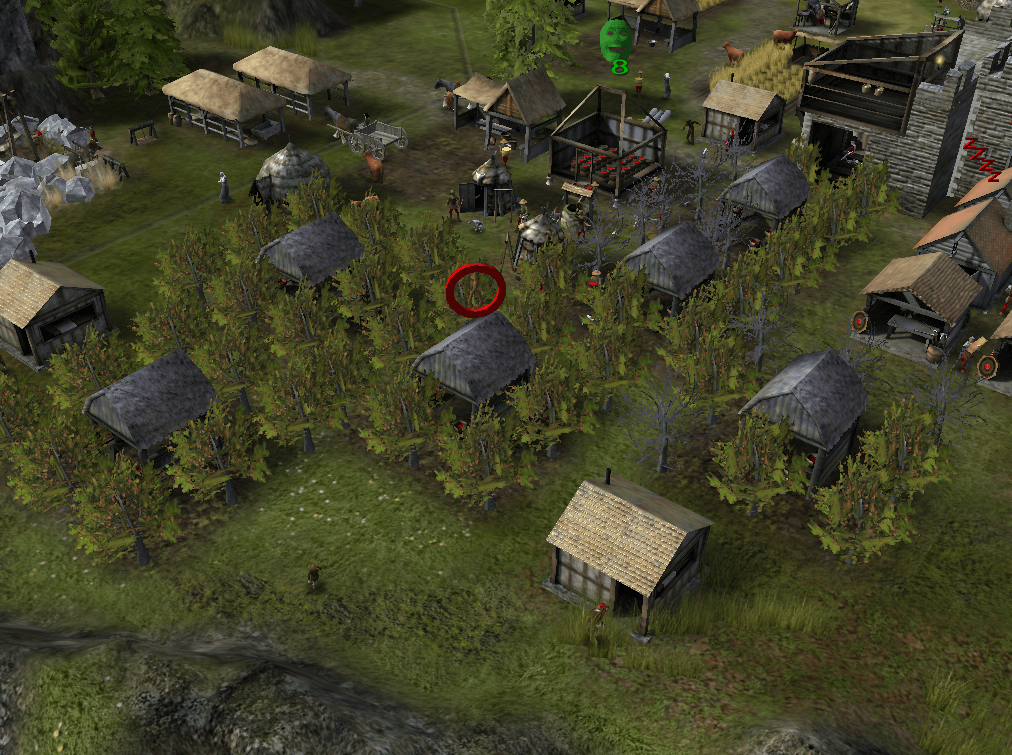 Buildings where these workers were previously working will show a red circle above it, with a noose in it for as long as the worker is a criminal. This is similar to the "no worker" icon apart from the noose in the centre. For each criminal in your Castle, this will have a negative effect of -1 popularity, which makes it impossible to ignore this problem for long.

To catch criminals, you must place a Guard Post in your castle. This building will sit a guard who will keep a watch out for any criminals nearby. The best place for this is right next to your Granary. Should the Guard see any criminals nearby, he will catch the criminal, place him under arrest and take him to the Courthouse for trial. Without a Courthouse, the Guard will do nothing, because there is nothing he can do with the criminal once they are caught. Also note that I have personally never witnessed a Guard turning to crime.

Once the criminal has been caught and taken to the Courthouse note that they will continue to have a negative effect on popularity even while locked up, until they have actually been sentenced by the Judge. To ensure that criminals actually get sentenced, you will also need at least one means of rehabilitation. However this nearly always produces a backlog, especially when it is a slow means of rehabilitation, so in actual fact there should be several.

Note that throughout this entire process, the red circle icon with a noose will continue to circle around any buildings these criminals were formerly working in, and unless you delete and re-place the building no new peasants will come to work here until the criminal has been successfully rehabilitated.

You can also take care of criminals other ways to what is described above- in the past I have even used Wall Mounted Rolling logs and Rock Tippers to kill criminals while they were still roaming free in my estate- saving a lot of time and getting a worker back to the building they came from very quickly. This saves a whole long and drawn out court process and rehabilitation in an instant. Simply place some wall near the criminal and attach the siege weapon onto the wall. Activate it when the criminal is nearby, and hey presto! You've just taken care of a criminal. Just be careful not to hit any buildings with your rolling logs if you choose that weapon, as it will destroy them.

I would however recommend this method to supplement the official method above, not to replace it. This is probably best used when you catch a criminal strolling through your estates rather than intentionally going looking for one. Hopefully this article gave you a better insight into the rehabilitation system in Stronghold 2, and how to best use it to your advantage.