An example of how The South African Zulu Nation made the most out of simple materials, the unusual War Spike was an excellent weapon. Simple to make and use, they were developed before King Shaka overhauled The Zulu Military Machine in the 17th Century. The War Spike was made of fire hardened wood in the shape of a 3-foot Club. Affixed through a hole in the top, was a 2.5-foot curved metal blade shank. Often, a portion was allowed to protrude from the opposite of the Club Head.

In use, The War Spike wad used to hook and often penetrate an Enemy Shield. Conversely, it could also be used as a stabbing weapon. Although largely abandoned with Shaka's reforms, The War Spike was still used by the time The Anglo-Zulu War began in the late 1870s. Capable of piercing a Pith Helmet, they still were considered quite lethal in use. 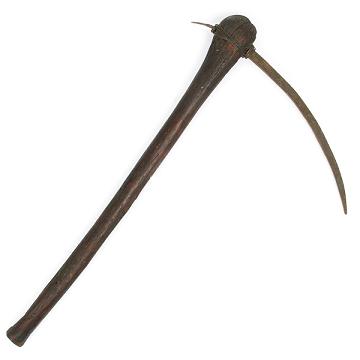