More appropriately called “umTshisa”, these were long and slender wooden sticks, shaped into a long – whip-like weapon. The Zulu “Fighting Stick” was used to settle disputes among Warriors. The actual use of war Spears and weapons for “personal” disputes was frowned upon within Zulu Culture. As with any “Duel of Honor”, the two Warriors would dress for battle. Rather than their traditional weapons, the umTshisa was used. Some could be as long as 3.5 feet long. The two Warriors would then “fight” each other by “swiping or slapping” the other. Capable of causing light blunt force trauma, normally after first blood was drawn, (the “bleeder” was the loser), the Duel would be stopped. Later, Zulu ''Fighting Sticks'' were used as a form of “training device” for young boys (wishing to train and prepare for military training). 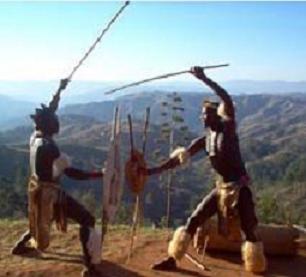