The uMbonambi Regiment was a Military Formation of The Zulu Empire, the origins of The Regiment was possibly around the 1840s. A ''Veteran'' Regiment, The Umbonambi were authorized to carry an almost ''Black'' War Shield (symbol of an experienced Warrior Regiment). Also authorized to ''marry'' (another sign of their status), they were also one of the few Zulu Impi (Army), authorized The Leopard Headdress. At the start of The Anglo-Zulu-War, The uMbonambi Regiment (numbering close to 2,000 Warriors) – occupied the position of The ''Left Horn''. As had been discussed, The Zulu used a fighting Formation called ''The Fighting Bull''. The ''Left'' and ''Right'' Horns were in reality Flanking Formations, designed to encircle an Enemy Force (allowing The ''Chest and Loins'' to charge and eliminate The Zulu's Opponent).

The uMbonambi also carried The Ikwa Spear (the broad-headed, Short Spear created and implemented by King Shaka in the 18th Century AD), as well as several Assegai (conventional Spears), mounted on the inside of their War Shield. Losing a moderate amount of their numbers at The Battles of Isandlhwana and Rorke's Drift (January, 1879), The uMbonambi numbered less than several hundred at the end of The War (later in 1879). 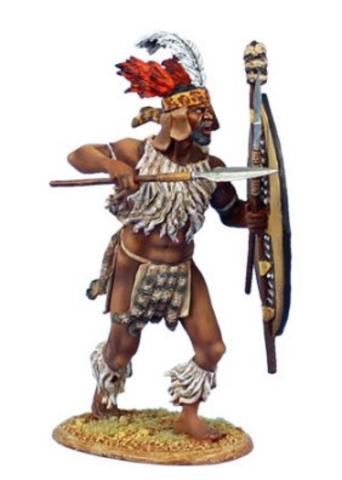