In the beginnings of amaZulu Culture, they were not particularly strong Warrior Culture. They (as most Southern African Tribes), fought in traditional methods and styles – popular for centuries. Most “battles” were not such. Often, Tribes with disputes, would “meet each other” on a wide field. Each side would array their Warriors in long formations (with often Family and friends in attendance). Each side would then shout “insults” to the other side. The “louder” a Regiment was the more they were “winning”. Occasionally, several groupings of Warriors would traverse the field and “engage” in a form of “mock combat”. Occasionally, actual injuries did occur (but death rarely).

With the advent of the great Warrior Chief Shaka, Zulu tactics would change dramatically. Not only did King Shaka completely redesign Zulu weaponry – he devised a battle tactic extremely effective in it's execution and effectiveness. Known as the Impondo Zenkomo or “Horns of The Bull”, this formation and tactic was seen as brilliant. With an enemy to the Zulu Front, a Main Force of Warriors (several Impis) would align in a Square. This would be the “Head and Chest” of “The Bull”. Behind this was “The Loins” (or Reserves). The “Head and Chest” would advance into an enemies front. Very quickly, the “Head and Chest” would flank outwards (left and right) in extensions or “Horns”.

These extensions would flank or encircle the enemy (until they were encircled). Without the ability to Retreat, the Zulu enemy had to now fight on all sides. Finally, the Zulu “Loin” (or Reserves) – would advance forward (replacing The Head and Loins). The resulting tactic would destroy an enemy very quickly. The Zulus deployed this tactic as a primary fighting technique through their military conquests. They would modify it to suit their “enemy” - but “The Horns of The Bull” would remain essentially unchanged. 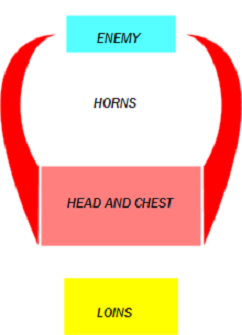