Another popular weapon of The Zulu Nation of Warriors, was the Knobkerie War Club. Made of regional wood, they too were tempered or treated with heat and animal fats to create a hard (almost metal-like), striking weapon. Often highly stylized and embellished with symbolism, The Knobkerie was used much as a Mace or War Hammer was in Medieval Europe. The handles were between 2.3 and 4 feet long. They featured an attached rounded stone or wooden “ball” top. The Ball top could be attached by several means. The Knobkerie could cause extreme blunt force trauma to a victim 9and even death). Many Zulu Commanders carried these into battle (as opposed to The Assegai). In some cases, there were even whole Zulu Regiments armed with The Knobkerie. Within their Nation, The Knobkerie was also use as an Executioner's Club, to dispatch traitors or cowards (considered unworthly to die by an Ilkwa or Assegai Spear). 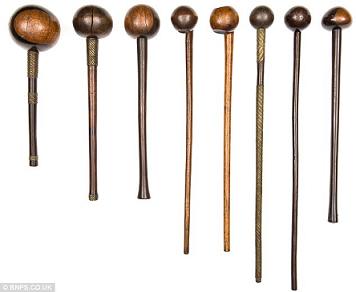