The basic and primary Battle Formation used by Zulu Chief's – The Impis was comparable to a European Infantry Regiment. The Zulu were familiar with Cavalry (from European contact), but they never developed a need to raise a “mounted” Impis. In use, even a Raiding, Scouting or related Formation of Warriors were considered an Impi. In actual large scale battle Operations, a typical Zulu Impi may contain 1,000 to 10,000 Warriors! Impis were not necessarily “commanded” by Generals or Field Marshals (Although the title of “General” was probably used after the reign of King Shaka.

The most Senior “Officer” - known as The Izinduna, gave orders and positioned his Impis as he saw fit. The Izinduna has been compared to an Ancient Roman Centurion class of “commander”. Often serving as a “Drill Sergeant” of sorts, The Izinduna would often shout out words of “encouragement” to his Impis (should they show signs of faltering). This tactic was especially important with “Green” (or untested Recruits).

Although originally not considered by European Command Officers in the field, Zulu Izinduna's DID communicate with one another to coordinate their attacks. This was especially important when “The Horns of The Bull” Formation was deployed. It was typical to place older and more experienced Warriors into the front 3 Ranks of Warriors. Their “skill and determination” in battle served to encourage the “younger soldiers” in the Rear Ranks to fight onward.

However in some cases, as with the “Ufusimba” Regiment (or “King's Guard”) - the entire Impis was battle tested and served to “protect” The Zulu King. They were often used as “Shock Troops” against an enemy. Another downfall to The Impi – was The Zulu's total lack of understanding of the European (British) firearm. Considered “unmanly” to “engage one's enemy at distance” - a typical Zulu Warrior likened personal hand to hand combat (to prove his mette). Although The Zulu's “attempted” to use captured British weaponry – the style never took on (and would be their eventual downfall). 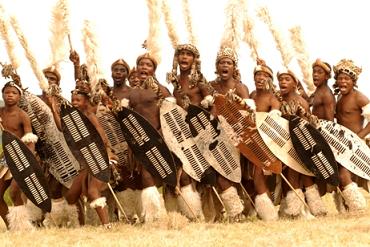