The Assegai Spear was the primary weapon of the Native African Tribe – The amaZulu. Developing from a minor fighting force, The Zulu would become a highly organized and efficient fighting force that would actually stop (for a period) – British advances into their Territories (Southern Africa). The Assegai was the backbone for any trained Zulu Warrior. Made on wood and steel, The Assegai Spear shaft was regional wood (sometimes heated to infuse hardness). The shaft was roughly 3.5 to 4 feet long. It tapered to a steel shank – to which was attached a slender, flattened Spear Head. This head was double-edged. Rather light (at 2 to 3 pounds), a Zulu Warrior was required to carry 2 such Assegai into battle. One would be “carried” on the inside of their War Shield (while the other was carried and deployed. In this way, should the Warrior lose or damage one, he had another to fall back on. In use, The Assegai was traditionally used as a stabbing weapon, but it could be thrown as with a traditional Spear. In use and design, The Assegai was remarkably similar to the ancient Roman Pilum Spear. 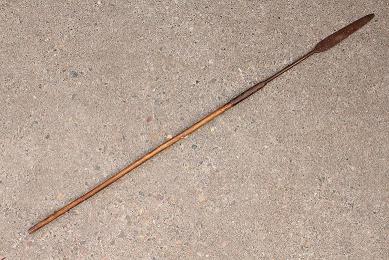