Built in 1762 for The Durrani Empire in Afghanistan, (under the commission of Shah Wali Khan) this “Supergun” is 14 feet long. Unusually cast (for this Era), in a composite metal blending of copper and brass – legend states that local inhabitants gave their cooking utensils for the smelting of the barrel. It has a bore diameter of 9.5 inches. The gun may have had an effective range of 1 mile (deploying a 80-pound shell). It was documented as having been used in battle (Panipat – 1761), it was also known as “The Dragon”, for the plume of fire it produced. Rudyard Kipling wrote of The Zamzama Gun in his novel “Kim”. Captured by Turkish forces in 1802, it is currently on display at The Lahore Museum, Pakistan. 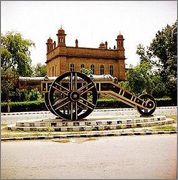