The Zamburak System was born out of the need to create a type of “Mobile Artillery” among The Middle Eastern “Gunpowder Empires”. Developed by both The Persians and Egyptian Armies of The Era, it was a small caliber cannon mounted on a wooden carriage/rack. This device was installed on the backs of Camels (specially trained to not run or bolt from the cannon report). This weapons system (while primitive by European standards) – was very effective in numerous “Desert Wars”. It was well documented by The British during The Ango-Afghan Wars (1831 to 1919). It even survived use during several World War I campaigns. 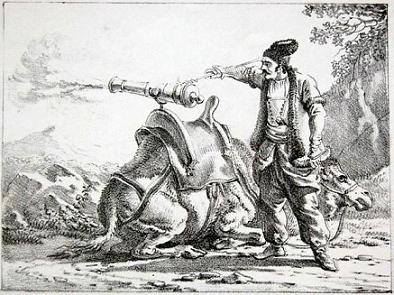