The immortal "tag line" of Pirates everywhere, this too has no ring of truth either with "real" Pirates either. Our friend Robert Louis Stevenson in 1881 - included the short missive in his book. "Treasure Island".
In totality, the stanza (attributed to a Sailing Shanty/Song, goes as such".

That pretty much completed it. When asked in later years the meaning of the Stanza, Stevenson stated he had heard of a small island off the coast of the British Virgin Islands named "Dead Chest Island". The rest was the imagination of Stevenson (imagining a suitable Sea Song that a Pirate MIGHT sing).

Enter American Writer and Poet Young E. Allison. Having enjoyed "Treasure Island", he no doubt wondered of the rest of the missive Shanty. In 1890, Allison "added" some 8 more paragraphs to "flesh out" the Tale. Published in Louisville, Kentucky under the name "The Derelict", it became a huge hit. "The Derelict" has two meanings. The first tells the tale of a group of Pirates marooned on a floating "shipwreck", thoroughly drunk and quite insane by the time they are finally rrscued. The second more "grisly" take is the same floating wreck that is boarded by a curious passing ship, only to find the entire crew killed each other over the ship's treasure - with no one surviving.

By 1901, Henry Wallon was commissioned to write songs for a Broadway Musical production of "Treasure Island". He included the words of "The Derelict" and set it to the now well known melody. With the "legend" bigger than the truth, the Poem would serve as the inspiration for Walt Disney and his creative teams - and their penning of "Yo Ho, Yo Ho, A Pirates Life For Me!" It was included in the opening of the 1967 Disneyland Theme Park attraction, "Pirates of The Caribbean. The rest as they say, is "Pirate History ". 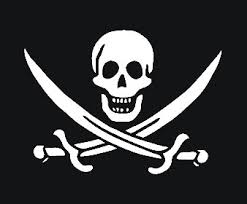