A well-known Bronze Age attempt at protective Shield design, The device got it's name from a Scottish Bog (Marsh), where the first example was discovered. Dating from 1200-800 B.C. - The Yetholm Shield (and other possible later variants), were a fusion of Bronze and Copper alloys. A rounded pattern was used, with the incorporation of a front “Boss”. They were decorated in raised rings and studs (although why is yet unclear). They ranged in diameter from 3.5 to 4-feet. They are some of the first examples of the types of War Shields that would later be seen in the 7th thru 11th Centuries throughout most of Europe. 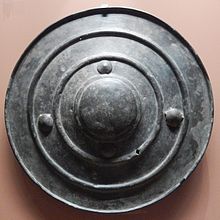