Yeoman of The Guard

Originally created by England's King Henry VIII in 1485 – these were specially selected men to serve as the King's personal Bodyguard. They were used in both “private and Public” capacities. Ranking below an Esquire, The Yeoman Guard at one time was England's “only” Standing Army until 1661. The Guard were to protect The King “in time of War” and to his Throne “in time of Peace”. The evolution of The Yeomanry today is reserved to high-ranking Non-Commissioned Officers who are retired and have attained certain award classifications. They receive a small payment. Still using Tudor Era uniforms, The Yeoman Guard received an unusual nickname (which became somewhat of an insult in the 18th Century). Called “Beefeaters”, the name was given to The Guard by The Grand Duke of Tuscanny (during a visit in 1669). He said “They are great eaters of beef, of which a very large ration is given to them daily at the court”. Debated to have meant that the Guard were “slovenly and overweight” due to The King “feeding them very well” - it was actually NOT the case. As The King picked only the tallest and strongest to serve as his Yeomanry. They also (like the Swiss Guard at The Vatican in Rome) – carry the Medieval Halberd Pole Arm as their primary weapon. They are NOT to be confused with Yeoman Warders. 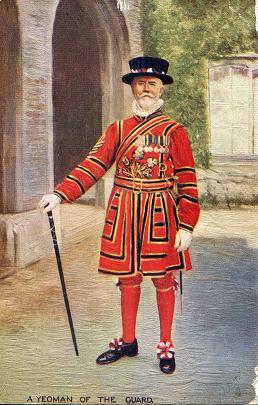