Often referred to simply as The Yardarm, The Yard was actually wood Spars (or Poles), which were place on top and below Canvas Sail, when lifted up a Ship’s Mast. These Devices were attached by connecting Rings to The Sail and were also loosely affixed to The Mast. Yards were raised or lowered by Line (also known as Backstays). Their placement enable a Ship to manipulate The Sail in such a way to gather Wind for propulsion. They also served to stabilize The Sail (due to their mostly heavy weight).

Yards are more closely associated with The Square Rigged Sail Pattern of The 17th Century forward. The Yard was actually broken down into three components. The First was The Bunt (or Rings to which the Canvas was attached). Second was The Quarter (or main body of The Yard) and Third, was The Yardarm (or ends).

Crew often had to traverse The Yards to perform maintenance or make adjustments to The Sail. This was dangerous and tedious work, in which many Sailors worked high in The Sails (or aloft). Yards were connected with guidelines, Footropes and Jacob Ladders. Sailors also used a form of Footrope known as The “Flemish Horse”. This rope device was akin to a Rappelling Rope or “Swiss Seat” harness. This enabled The Crew to work with some relative safety from The Yards.

Another tradition that developed from working high in The Yards, was the practice known as “Manning The Yards”. Seen in the 18th Century, the practice involved all Crewman who were not assigned a specific Ship Station (or Post), to climb into a Ships Yards. Often whole compliments did this. The objective was when a Warship entered a Port or Harbor, with all Crewman visible – no one was manning The Ships cannon. Some Pirates used this tactic as a feint to lure wayward Ships closer (only to be greeted by hidden Crewmen at their guns ready to fire).

Yards were important for “Setting The Sail” or preparing a Rig Pattern for propulsion. Adjustments made to The Sail by The Yards controlled this, and required Crewmen to actually be aloft in The Canvas to make the adjustments while the Ship was under Sail (and moving). The term is still used in Navies as referring to the high wires of a Warships super structure, were Pennants and Communications arrays are placed. 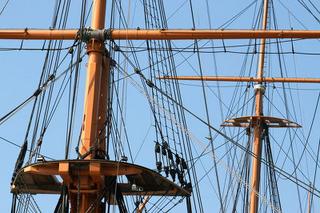