Much like the previously discussed Dorus Spear, The 3rd Century BC ‘’Xyston’’ was another form of weapon used by Classic Greek Soldiers. It was made famous by both Philip of Macedon and his Son, Alexander The Great. Comparable to The Javelin, it was not as long as The Phalanx Weapon, The Sarissa. Made of reinforced wood, The Xyston featured a tapered iron Spearhead with an extended “cowl’’ which provided stability for The Head. The Shaft – which ranged from 11 to 14-feet in length, also featured n iron counterweight at the opposite end. Not considered a throwing or ranged weapon, The Xyston was a thrusting or stabbing weapon. Very few examples have survived into The Modern Age. However, a classic example can be seen in the famed mosaic of Alexander The Great (from Pompeii). Some Historians cite The Xyston as the evolutionary ‘’Father” to the later Roman Pilum Spear. 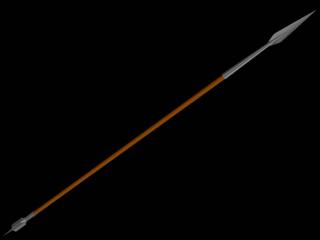