Wreckers were a class of persons that could best be described as "Land Pirates". What wad born out of many unfortunate fates for ships straying too close to shore (especially during storms), became a form of "business" for the people known as "Wreckers". As mentioned, navigation in a storm during The "Age of Sail" was wrought with perils. Often, ships had to rely on Coastal Lights (fires set to warn ships of the impending rocky coast and the dangers of wrecking on them). This was before the standard placement of Lighthouses for the same purpose.

In the unfortunate happenstance that a vessel did wreck, those survivors were rescued (or lost), and the broken ship (and cargo) would be left behind. Enter the Wreckers. Like a swarm of Ants, these men and women would converge of such a wreck and literally strip it of any usable cargo and goods. These would be kept or sold. According to tradition  (and Law), a person finding such a wreck with cargo , had to attempt to contact the lawful owner and "offer" salvage rates (or rather 1/4 of the actual non-damaged cost). It was either this, or the Owner would incur full cost to reclaim and salvage on his own (very expensive). Often and Owner would simply "write off" the loss with his Insurance Carrier.

Wreckers began to experience the problem with better ships and better navigation with regards to storms. In some cases, this was corrected by "staging" a wreck. In a storm, a horse or mule would wear lanterns and be walked up and down the shoreline or on top of a particularly rocky coast. The trick was to fool the ship into mistaking the Lights for "genuine" warming lights. The practice was very effective. Some Coasts were rampant with Wrecker Towns, and these were well known to ship Captains. Many took their chances out in the open sea during a storm, rather than risking dealing with the false "lights" of The Wreckers. Although lock Authorities in most Countries were aware of the problem, few really did anything to stop them. Some towns still in existence today, started out as Wrecker Towns. 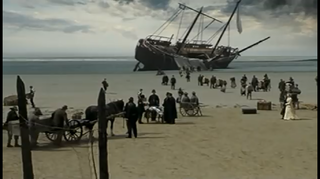