Popular in many Northern and Eastern European Kingdoms, The Wool (or Woolen Hat), was a common feature with Commoner and the emerging "Middle Class" Merchants. Seen around the 15th Century,  it is clear that The Wool Hat was a direct "relation" to the popular Chaperon. Created from much shorter cloth, it was made of heavy wool, linen or felt. Unlike The Chaperon, a cap was attached - around which the material was "spooled". The 3 foot extra was commonly used as a "neck wrap" of sorts. Unusually, bright colors were not the norm. Blacks, greys and brown were seen (as evidenced by Medieval Art). They were regulated to "Winter" or sailing wear (and we're somewhat popularized by The Hanseatic League. By the beginning of the 17th Century, The Wool Hat had fallen out of use. 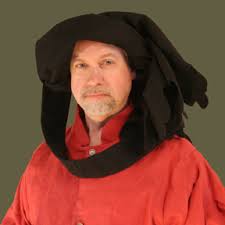