The first attempt at using wire as a battlefield defensive system was born out of The American Civil War. During The Knoxville Tennessee Campaign (1864), Union General Ambrose Burnside strung up telegraph wiring around tree stumps as a way of slowing down Confederate Forces. The theory was an effective measure that would carry forward. Again used by The Dutch Boers in South Africa against The British, by World War I, wire obstacles were considered a very effective measure (and counter-measure). Both “straight wire” with barbed extensions and “rounded” wire were both effective measures at stopping or slowing Infantry advances. If damaged by artillery (or Armored Vehicles), replacement was simple enough. Often elaborate designs were incorporated into the Trench Defensive Systems used by all sides in the conflict. Improvised devices (such as grenades) were attached to the wires (via triggering devices), which proved even more lethal. The use of Wire Obstacles would become a common feature in Modern Warfare (even today). 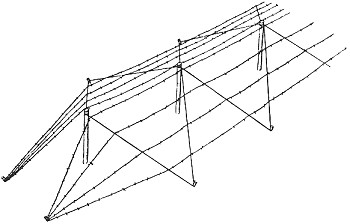