William Hiseland holds twin claims in English History. The first, that He was (by claim) the ''oldest'' Soldier to have actively served during The English Civil War. Born in 1620 (although His birth record is in question), Hiseland claimed to have fought for The Royalists at 13 years of age ((1642). He claimed service at several major engagements, most notably at The Battle of Edge Hill. Later, during The War of Spanish Succession (of which England had a stake), Hiseland enlisted again and fought at the age of 88 with The Royal Scots Regiment.

He claimed 80 years of military service to The Crown and applied for Military Pension and was awarded one at 100 years. Hiseland was also given the unofficial honor of being the ''last'' Veteran of The English Civil Wars (although this too has been debated by Historians). Awarded a Royal Honor by The Crown to have his likeness commissioned for painting, this was later placed in The Royal Hospital at Chelsea (of which Hiseland lived with other Pensioners) – until his death at 111 years in 1732. His portrait is still displayed there. 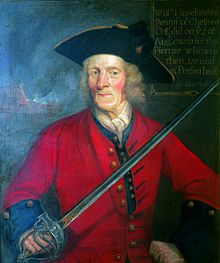