His birth date is unknown, but Captain William Fly (an American), raided the coast of New England and surrounding areas in the mid-1720s. Targeting Commerce (and no doubt Slave Ships), he cut a swath in early Colonial Shipping for 3 months. His ship The “Fame's Revenge”, was well known. His procurement of the ship was through mutiny (with the crew) – and the death of it's Captain, while on the way to West Africa. Elected Captain, he and his crew captured 5 ships. Having been captured (after a short battle with a British Warship) – Fly and his crew were transported to Boston, Massachusetts for trial. He and the crew claimed that their “previous” Captain treated them badly and that Piracy was their only escape. The “attempt” at their justifications didn't work – and Fry and his crew were hanged on 1726. Fly's body was gibbeted in Boston Harbor - as a warning! 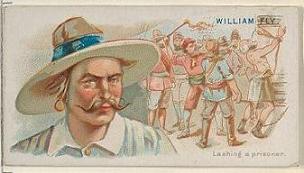