The Wimple was a standard article for wear during the 11th Century in most of Europe. Worn by Women, The Wimple served a religious purpose. The covering of the head was seen as an act of devotion.  The same applied to it's ability to "hide" the "feminine appearance". The Wimple was adopted by the Church for wear by Nuns. In it's more common usage, The Wimple was worn by both Nobility and Commoner alike. Most material was either linen or muslin, and often heavily starched. They could be elaborately folded or creased, depending on the Region of wear fashion requirements.

The fashion could be made of one piece or multiple piece. As a single piece, it resembled a form fitting Hood with an opening for the face. In multiple components, it covered the neck, top and sides of the head. The Wimple was used with various types of headgear choices as well. The Wimple stopped being used around the 15th Century. However, it us still used by various Religious Orders even today. 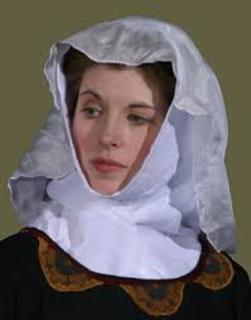