Raised in 1777 under authority of American Continental Army Commander George Washington, Colonel Samuel Webb was given command of The ''Continental Regiment''. They were composed mostly of unassigned Connecticut Volunteers. They would be assigned to The Continental Army in 1777. Later in The War, They would be re-designated The 9th Connecticut Infantry Regiment until after The Battle of Rhode Island (1781). Casualties caused them to merge with The 2nd Connecticut Regiment. They would be disbanded with the end of The War in 1783. Their Flag was a Yellow Field which featured a Sword place at the Lower section of The Flag Border. ''suspended'' from The Sword Point was a ''Wreath of Honor''. 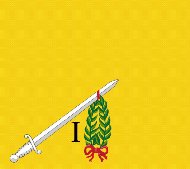