After The American Revolutionary War, The United States Congress disbanded it's Army, determined to not follow ''European'' Protocols of maintaining a Standing Army (which could be seen by it's populace as a means of maintaining control over them). However, with the ever rapid growth of American interests and territorial gains, such a Force was seen as being necessary (at least on a temporary basis). Hence was born The Legion of The United States. Known as ''Wayne's Legion'' (as it was commanded by General Anthony Wayne), it's primary goal was to field ''professional'' Soldiers as opposed to using local state Militias (often poorly trained).

Existing (under Constitutional Authority) from 1792 to 1796. The Legion was roughly 5,000 Officers and Men of all Ranks. This included the ''Branches'' of ''Infantry, Artillery and Mounted Forces (Dragoons)''. The main Mission of The Legion was the protection of Settlers and Commerce moving West, from hostile Native American Tribes.

The Legion also adopted the beginnings of a standard training and uniform protocols. (3) sub-Legions were established, each identified with it's own color. Regulations were also codified and issued to soldiers. The Legion is also credited with the establishment of the first formalized ''Camp of Instruction'' (Training Base) known as ''Legionville'' (located in Pennsylvania). The Formation would fight it's first major engagement against The Northwest Indian Tribes (Northwest War).

In 1796, The US Congress decided to establish a standing Army, and renamed The Legion (US Army). It's numbers were diminished to slightly over 3,000-effectives. Today's 3rd US Infantry (The ''Old Guard''), is the direct ''ancestor'' to The Legion. 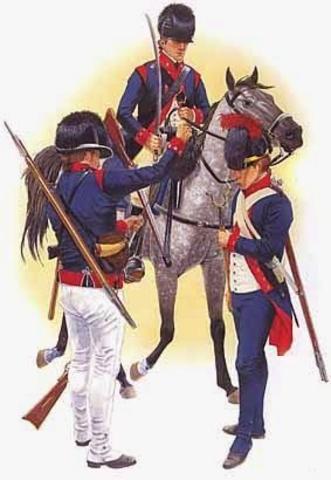