One of the earliest forms of creating “legal” documents which could not be Forged, and later use to “identify” the “wealth of one’s knowledge” (The Library), The Watermark was first devised in Italy in the 12th Century. As stated, such impressions created – were to verify the authenticity of a Document (from one that had been tampered with or Forged). This was of particular use with contested Wills and other documents pertaining to Inheritance. Later, a Nobleman’s Library of Books were treated with Watermarks. Books were seen as wealth and conversely were liable to theft in some cases. The use of The Watermark impression established a unique and one of a kind Ownership.

The first method used was by simply changing the thickness of the paper of the Object to be Watermarked. This was done while the paper (in Binding) was still wet. This very easy method created a shadow (placed strategically known portion of the Book or Document – known only to it’s Creator or later Commissioned Owner).

Later, the use of Chemical applications such as Lemon Juice cured with Teas, were applied (painted) into unusual shapes and designs known only to The Owner. This could be an Initial or shape. These shapes were often direct relations to The Owner’s Heraldry (another useful method of establishing Ownership). These images could be later “brought to sight” through the slight heating of the image with a Candle. Other times, a Salt or Vinegar solution could be applied (which obviously would cause little damage to priceless Documents or Books.

By the 18th Century forward, new methods involving imprinting Devices such as The “Dandy Roller” were used. These machines featured an image created from metal wires and – using applied pressures, created an “invisible” image. This could be “seen” by rubbing lead or charcoal on the purposed location of the impression.

Watermarking became a standard method of establish authentic Currency – first beginning in the 20th Century. Most techniques are still kept somewhat “secretive” so as to dissuade would be Counterfeiters. Such “Currency Watermarks” are in use by most Nations using Paper Currency in International and Domestic requirements. Today's “Watermarks” owe their “beginnings” to the once Medieval practice. 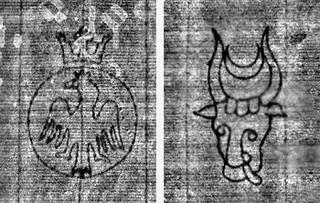