This was perhaps the largest Trebuchet ever built. Created in Scotland at the command of King Edward Longshanks of England, it was to be used in The Wars for Scottish Independence (1303). Intended for the destruction of Stirling Castle, it is documented that when disassembled, it took 30 oxen carts to move. It also took 49 Master Carpenters and Laborers to erect what was said to have been a 300 to 400 foot tall monster!. The Warwolf was more than just intimidating to see. She was said to be able to hurl 300 to 400 pound rocks at a target (or closer, a small farming tractor). It was said that one shot from The Warwolf could take down a single defensive perimeter wall.  King Edward had initially thought that the mere sight of Warwolf would cause the Scottish to immediately surrender. It did not have that intention. He was said to have witnessed the first "shot" of Warwolf at Stirling Castle. It indeed threw it's 400 pound rock at the outer perimeter curtain wall of Stirling Castle. And it caved in. Warwolf was not used again (as it's psychological impact was set). What happened to it is unclear. However many models and examples have been constructed (although on the ""small scale"). 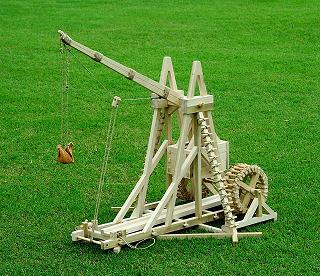