The common Pig – while a fixture on a Farm, would not illicit images as a War Device. However, Ancient Roman Armies regularly employed the creatures as a counter measure against War Elephants (quite effectively, it would seem). As early as 1 BC, the use of Pigs in combat were reported by Roman Historians. In proper contrast, Boars (Wild Pigs) were preferred – due to their hairy hides. This was a major component to the use of the animal in combat. Elephants were massive animals, well trained to smash through Infantry Lines (stamping on Soldiers) – causing general havoc. Although Soldiers could take down such animals, the need to properly mass Soldiers for this task was difficult. The Elephant was fast and unrelenting. However, for all their size and obvious “power”, they could be easily frightened. Canines were used, but they were not as effective at scaring the beasts.

However, during The Siege of Megara (266 BC – Corinth), Roman Legions captured Wild Boars and covered them with pitch. Setting the hapless animals aflame, they would be set loose at the front of an Infantry Line. The animals (squealing in pain), would run forward – a ball of flame. The noise (and no doubt the sight), terrified the War Elephants deployed against The Roman Lines, causing them to scatter. The tactic was used many times in The Provinces with some success. If Wild Boars could not be found, a regular Pig was used in much the same way. Often, if pitch was not used, a “coat” of Hay or Straw was made to cover the animal. This would likewise be set on fire (with similar results). 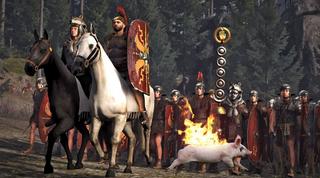